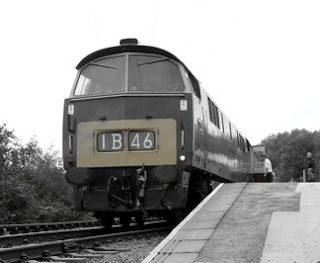 October already!  Where has the year gone?  It barely seems a few weeks since I joined the NVR and began life as a working volunteer at the Diesel Gala in March – and now here I am, a seasoned veteran officiating at the autumn diesel gala, which is the final big weekend event in the railway’s calendar.
The gala ran for three days, and I worked Saturday and Sunday on the trains as TTI.  Overall the atmosphere was pretty good, although there was the usual lack of manners and politeness that accompanies these events – in marked contrast to steam and family days.  This was particularly noticeable after last week’s 1940’s event where everyone was open and friendly.  The diesel crowd, by and large, stick their heads into Nikons and timetables and generally ignore everyone else around them unless they are part of their particular clique.  They also resent being asked to show tickets on board the trains, but the reason we ask to see them is that the diesel followers are notorious for resenting having to pay to travel on the trains in the first place – hence the need for regular inspections!  Also, because they insist on leaving one train at a station and then jumping aboard another train to go back behind a different loco, they come across several roving TTI’s during the day – but as we may not have seen them before, we don’t know that, “I’ve shown you my ticket a dozen times already.”  C’est la vie.
That aside, things went rather well.  We had a dazzling selection of motive power to hand, from class 08 up to 66 with pretty much everything in between.  Highlights of the gala depended upon personal preferences, but for me the class 52 Western D1062 Western Courier in maroon livery topped the bill, with 50135 Ark Royal close behind.  The Hoover was adorned in Loadhaul livery, which of course it never carried, so I wasn’t expecting to be impressed.  In the event, however, the loco actually suited this scheme far more than some liveries it did carry in BR service. 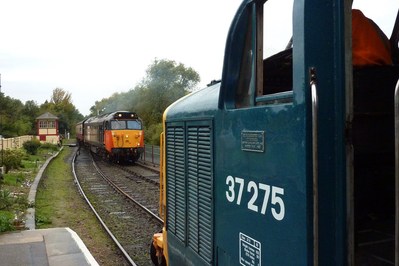 Three rakes of coaches were pressed into service, and being the NVR, we did this in our usual quirky fashion.  Set 1 was a five-car Mk1 rake – nothing unusual there.  Set 2 consisted of the four DSB opens plus the Belgian sliding door coach.  This vehicle was, of course, incompatible with the DSB’s so had no through corridor connection.  Set 3 was the most eclectic rake of the lot.  Normally we’d use the Wagon Lit set, but this is away earning a living on a filming contract.  We could have hired in a set of coaches, but we’d sooner do things our way.  So we got the non-operational twin-car DMU, coupled it up to two spare TPO coaches and stuck a Mk 1 TSO on the end.  Passengers were permitted to travel in one TPO, which is fine if you don’t want any light or even a window to look out of.  There was also only one seat, as this was the stowage vehicle!  Let’s just say that ticket inspections in this vehicle were quick and easy … 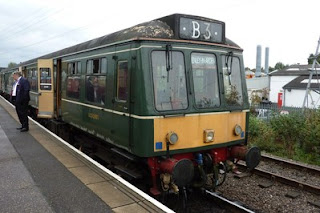 Not quite as it may appear!  A very rare chance to
photograph the terminally ill DMU in passenger service - sort of.
Thanks to great teamwork on behalf of the loco crews, yard staff and signalbox, we kept the intensive service running pretty much on time for all three days.  Ironically the only real slip up came on Saturday night when we ran a single rake of coaches on two Wansford – Peterborough and return trips as Beer-Ex trains.  The Western was at one end, and two 37’s at the other.  Although plenty of NVR staff would ride these trains on an off-duty basis, I’d volunteered to stay on duty for these services as I don’t generally drink so wasn’t bothered about signing off and having a pint.  What I was really after was some nocturnal photography to try out my new shutter release cable, and planned to ride the trains, photograph them back at Wansford then do a night time shoot around the depot.  What could possibly go wrong?
I soon found out.  The Western failed at Wansford.  Not a total calamity with a dozen replacement locos lying around the place, but the logistics conspired against us.  In order to stick a new loco onto the front of the train, the whole consist had to be shunted out of the station.  You can’t shunt with passengers on board, so everyone had to be turfed off.  And who do you think got handed that enviable task?  The only idiot still on duty, that’s who.  The compartment coaches weren’t so bad; stick head in, announce the bad news and run away.  The TSO was a different matter.  Located immediately behind the recalcitrant loco, this coach was full of diehard Western fans who wanted some good nocturnal Maybach thrash accompanied by a pint.  Or five.  Telling them that the loco was knackered was one thing.  Chucking them off the train was another, especially as the weather, which had been very kind all day, had now turned and was chucking it down.  People were not happy.  People let me know they weren’t happy.  I felt about as popular as a ham sandwich in a mosque. 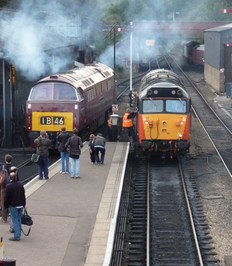 At length Control took control and chucked 50135 on top of the Western so that we could finally get going.  And when we got going, we went in fine style.  I took an executive decision not to do a ticket inspection for health and safety reasons as I would have been a Christian entering a TSO of well-oiled lions.  Some things are best left alone.  On arrival back at Wansford it was really pouring down, and I reluctantly cancelled my photoshoot around the depot.  I did manage some nice station shots, however, as I could work undercover and experiment with timings to get the best results.  In this respect the rain actually helped out, as the wet platforms provided some reflections that illuminated the station and added to the overall scene. 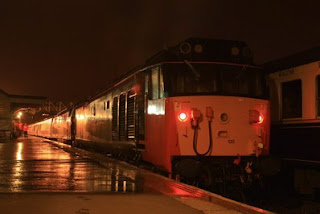 It could almost be Plymouth and The Night Riviera.
The rain continued all day Sunday, varying between heavy downpours and very heavy downpours.  Passenger numbers were lower, and working the trains was a lot easier.  It also meant that I had the chance to do a spot of photography, including legging it out of Wansford so that I could get a lineside shot of the Western in action, as opposed to station and yard shots.  This picture was worth the inevitable soaking that resulted from my mad dash – the things I do for pleasure. 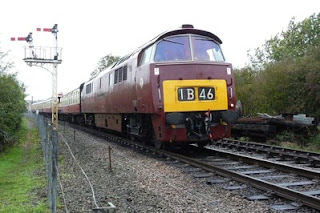 D1062 leaving Newquay for Paddington in '65.  I wish!
We received some good feedback about the gala via the various relevant forums that deal in such matters, or so I’ve been told.  We were praised for the choice of locos, running the advertised service, providing the locos that we said we would run and keeping it all together.  I felt that it was a big improvement over the Spring gala, and overall the mood seemed better and less intense.
And so that pretty much brings the Nene Valley season to a close.  We’re still running up until the end of October and round off with Thomas having a spooky Halloween evening.  This is followed by a Fireworks Fiesta on 6 November before preparations commence in earnest for the Santa Specials to complete the year. 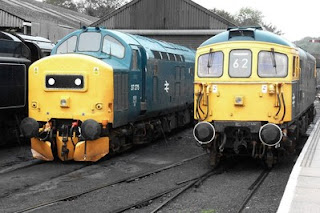 The rain hammers down at Wansford - not readily visible here, but the full set
of larger images should shortly appear in Steamy Scenes photo galleries.
at 21:53