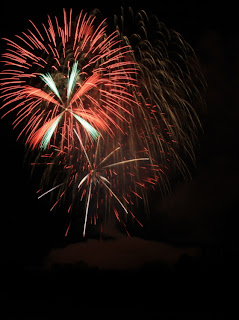 Although the Nene Valley Railway has now closed to the public until the Santa Specials start running, the line has a special duty every year to fulfil on Guy Fawkes Night as it provides special trains to take visitors to the Ferry Meadows Fireworks Fiesta.
Starting at Wansford, the first train runs to Ferry Meadows then onwards as ecs to Peterborough for the first group of party-goers – and there were so many of them it was a like a First Capital Connect commuter service!  Except that the train had welcoming, friendly staff of course …
The train was formed of the four open-plan DSB saloons, one of which had no lights as the batteries wouldn’t hold the charge.  Unfortunately, this was the bar car!  Our Polish tank loco provided power at one end, and a class 14 diesel top and tailed at the other.  Neither loco had heating facilities, so it was rather chilly on board after a while.  The idea was essentially to cram as many people on board as possible for the 10-minute trip to Ferry, then return ecs to Peterborough and repeat the process.  Both trains were packed out, but the mood was easygoing and relaxed. 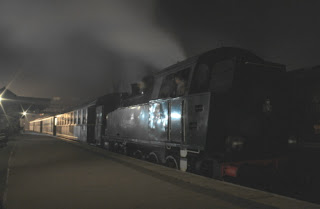 A moody scene at Wansford after the last train had returned.
Once the second batch of passengers detrained, the fun part of the evening began.  The train runs down the line to Lynch Bridge, where it parks up.  All the train crew tuck into their fish and chips, thoughtfully delivered to Peterborough station in advance.  Then it’s time to watch the fireworks. 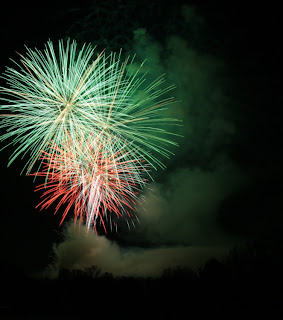 Naturally this presented me with a golden opportunity to try out a new genre of photography.  I was able to get off the train onto Lynch Bridge, and by wedging myself and the tripod between the buffers and footboards, I had an excellent vantage point of the whole area.  Yes, it was cold, dirty and extremely uncomfortable, but if it were easy then everyone would do it.  The sensible people stayed in the nice cold train, so they weren’t that much better off anyway … 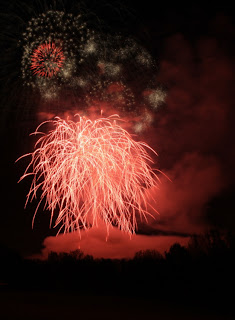 The railway is located sufficiently distant from the park so that it enables a grandstand view of proceedings.  Before the main event, nearby Castor puts on a small display, which was very useful as I could use it for practise and get my settings right!  Then comes the legendary Ferry Meadows display, with some breathtaking lighting effects in a superbly co-ordinated sequence.  They last for a good 15 minutes and build up to an incredible finale of dazzling lights in all manner of artistic patterns and designs.
Following the display the train repeated the commuter role it was provided for, before heading back to Wansford and a break before Santa Claus comes to town in December! 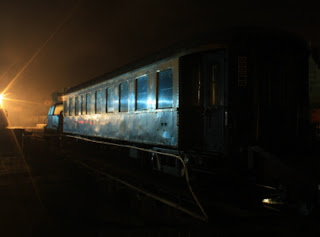