All Steamed Up With Stan & Ollie

Faced with another dull weekend of ‘sitting’, I was idly flicking through various websites on Friday night when I happened upon the Great Central Railway’s pages, and discovered that they were holding a Steam Gala over the weekend. My interest heightened when I read that no fewer than eight locos would be in traffic on a mixture of trains operating to an intensive timetable. This was more like it! The motive power line up was impressive, but the clincher was LMS 5690 Leander – a loco that I’ve not seen before. The theme was LMS / BR Midland orientated, so all the trains would be pretty much running in period, and over an appropriate length of line between Loughborough and Leicester. Although the railway is only about 40 miles away I’d not visited it since 1995 – my interest in railways has been pretty dormant until last summer when I discovered that steam locos make excellent filming subjects, and so now was a good time to get reacquainted. 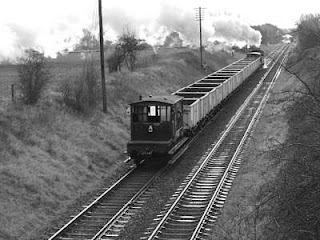 First job after packing the Grumpy Git camera-and-butty bag was to walk 5 miles to Marston in order to retrieve my car from a layby. Why? Well, good old Gordon Brown is in full ‘save the planet’ mode with the election coming, and has been ordering all of us to drive 5 miles less every week, which, by default, means that you have to abandon your car on the Friday evening homeward bound commute long before you actually finish your journey. Hmmm. This apparently saves a polar bear’s life, but adds an hour and a half to the journey. I really don’t think Gordy thought this through – now there’s a surprise.
Once I was reunited with my vehicle, I braved the early morning frost and set off for the Great Central Railway. I’d Google-Earthed the area online the night before and studied various photo albums to seek out some good vantage points. There appears to be only two good photographic locations, Woodthorpe which lies just outside of Loughborough, and Kinchley Lane near to Swithland Reservoir. Trees and vegetation hem in the vast majority of the line, although driving my car another five miles a week will presumably sort this out.
I set off initially for Kinchley Lane, and soon discovered that it was a favourite spot due to the amount of other photographers already on location, despite the early hour. It felt quite strange being in such vast crowds – when I film on the Nene Valley Railway I have the run of the entire line and only ever meet dog walkers and bird watchers!
Now I should say that I don’t generally follow the herd instinct, and after a few trains had passed by I started walking around to find some alternative photo spots. This was partly because being stood in one spot was boring, and would make the film I was shooting rather bland – plus I was freezing my nadgers off. I soon found several different vantage points within the general area, and was able to shoot from some more interesting perspectives. There was also much more freedom of movement than being in the large crowd up the embankment. 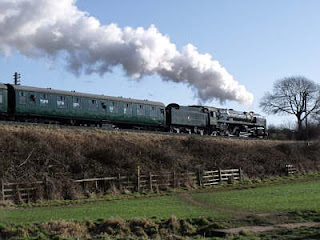 The day’s menu was exciting; starting with local branch line trains with a main course of express passenger services. This was followed by a dessert of freight trains and garnished with a TPO set. In between various courses, there was a medley of light loco movements – no shortage of interest or variety.
After several hours at Kinchley lane, I headed down to Woodthorpe. Another large congregation of photographers proved that I had the right spot. The field at this location offers some good panning shots, and it is also possible to get trackside for some close ups. There are two overbridges in the area offering more potential, and for the suicidal there is also the bridge that carries the A6006 across the line. Most photographers crowd round the signal and get in each other’s faces ….. 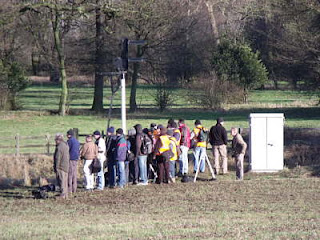 ….. or they do the same thing on the overbridge. That’s not my idea of fun. By moving around the area between shots, it was possible to create some variety in the film clips, so I was quite pleased with the end results. However, I’d like to return on a quieter day and really explore the line, as there must be other locations off the beaten track just waiting to be discovered. I also fancy taking a trip along the railway as well; a fair chunk of it is double-tracked and has the atmosphere of a real mainline. 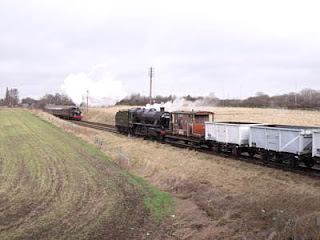 I enjoyed Saturday so much that I returned on Sunday for some more shots – in particular the overbridges at Woodthorpe that I hadn’t tried the previous day. The weather wasn’t as good as Saturday, but otherwise it was pleasant enough, apart from the cold. I called it a day around lunchtime after exhausting all three sets of batteries in one morning – I’d accidentally purchased alkaline instead of my usual lithium, and they kept giving up. I lost three excellent clips this way – not impressive, given the price of batteries. The lithiums can usually give me a couple of days of intensive filming; the alkalines lasted about as long as a thought in a Cheeky Girl’s head.
The film is now in production at The Grumpy Git Productions Studio (my back bedroom) and I’ll upload the photos in due course. Given the number of photographers who were present at the event, the ‘net and YouTube should be packed full of photos and film from the weekend! There really were hundreds of enthusiasts present, and we all drove out there … so here’s a thought for five-miles-less Gordon: if you politicians hadn’t closed down these railways, then we wouldn’t all be driving hundreds of miles every weekend to photograph them in preservation! Think about it.
Stan and Ollie? Oh yes. Well, Stan is Stanier, and Ollie is Oliver Cromwell (70013 BR Pacific). But you knew that already…
Anyone interested in the Great Central Railway should visit this exceptional photographic website by Paul Biggs
at 20:50