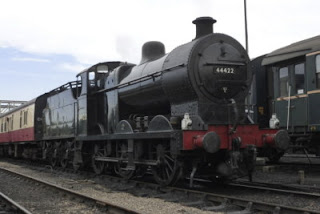 It’s been three weeks since my last visit to the NVR, unless you include the lingerie photoshoot for the calendar project, so it was great to go back after such an unusually long gap on Sunday – in full TTI uniform, not lacy skimpies I hasten to add.  The season closes next Sunday, so this was my penultimate turn of duty for the year, other than a couple of one-off special events I’m popping down for.  The year seems to have positively flown by since I joined the railway back in February.
Sunday’s timetable was the easy three-train schedule, with Thomas in steam between Wansford and Yarwell as it’s the school holidays, and 4F 44422 back in service working the main service down to Peterborough.  Although chilly, the skies were crystal clear, and bright sunshine brought out the crowds – better than some summer running days, I noticed.  All three trains loaded well, so there was plenty to keep the star team busy – Eddie and myself on TTI duty, Matt as Guard and Laura adding glamour and some down to earth commonsense in her usual manner as trainee Guard.  With Stephen on the bar I was guaranteed a decent cup of coffee – it takes a long time to train people how to make a drinkable cuppa, but the effort pays off in the end.
The atmosphere on board the train was good, and the day was only marred by some idiots who decided to get off a train at Ferry Meadows after it had been waved off and was already in motion – this despite a 5 minute dwell time as we loaded a large group of people and all their accompanying baby buggies, prams, bikes, toys and nappy changing bags and a fridge freezer.  Okay, I made that bit up.  They didn’t have any nappy changing bags.
Next weekend is the finale of the season, with Thomas's Halloween Party on Saturday night.  I’ve been roped into helping out with this event, and although the NVR props department has run out of scary masks, Jayne assured me that I don’t need one.  “Just come as you are dear; your face will scare the living daylights out of anyone.”
It’s that sort of kind, warm-hearted appreciation that has kept me going back to the NVR week after week!
at 19:20