I mentioned a couple of posts ago that I’m ratcheting up the modelling as the season approaches. Work is progressing on the Ten Commandments factory unit that I received from Dave a couple of weeks ago, while I have also started work on the two lorryloads that accompanied the building. If I have lorryloads I need - yes, you’re way ahead of me again - a lorry. Fortunately I have a spare Volvo FH artic with a dropside trailer doing nothing, so that can form part of this project. Here is progress to date: 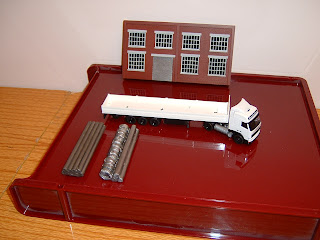 The truck appears ‘as is’ as work hasn’t begun yet. The two loads are simple one-piece castings; one is a stack of steel pipes and the other steel pipes plus stacks of steel coil. For a one-piece plaster cast moulding, they are reasonably good and look the part. I gave both loads an all over coat of Citadel Miniatures ‘Boltgun Metal’ grey, an excellent colour that really looks the part representing unpainted steel. Next stage is to detail and weather these loads to make them look more realistic.

At the rear of this collection is one of the factory units. It has the basic colours applied, but needs tidying up to make it look halfway decent. The windows and frames were a nightmare; I really do not like a one piece casting for buildings and would prefer a kit that can be made up more convincingly. That said, this could still be made into a nice model with a bit of work.

I actually started with the windows and am working out! The whole building was sprayed with Halfords Black Primer to provide the undercoat as well as the basis for the glazing. For the basic brickwork I used Citadel Miniatures ’Terracotta’, which is one of the most convincing shades of red brick that I’ve come across. Windowsills and lintels were painted pale grey, and window frames in white, while the roller shutter door is in Boltgun Metal again. I was mildly surprised to see that a vintage building such as this features a roller shutter door rather than wooden barn doors for the loading bay. This rather dates the building to one that was built probably during the Victorian era, but modernised from the 1970’s onwards.

I got all the basic colours done, and was debating whether to tackle the awful window frames when Radio 2 took the decision out of my hands! On Sunday evening, an Abba concert was playing at Hyde Park, hosted by Chris Evans and featuring an interesting line up. So, to the strains of Does Your Mother Know, Waterloo and the incomparable Kylie blasting out Super Trouper for all she’s worth, the window frames got painted!

At this stage, the building is not much to look at. I wasn’t going to post this picture, but decided that if I did, it would motivate me to improve it and create a reasonable finished product.