Dyeing to Get Dirty

Way back (or so it seems) in December I attended the model railway exhibition at Wigan. Having become jaded by the quality of almost all shows these days I rarely bother to travel around to see the same inevitable line up that I’ve seen everywhere else. However, a large and urgent stock delivery meant that the three-hour cross-country trek was a necessity – but am I glad I went! Wigan was a model railway exhibition – doing exactly what it said on the tin. High quality, fully operational and interesting layouts covering a broad arena of gauges, periods and nationalities were backed up with relevant trade specialists. Such a pleasant change from the usual rows and rows of second-hand Hornby and Bachmann box shifters that make most shows look like a carboot sale with a few token layouts.

Difficult to choose a favourite layout because the quality was so high, but the scenery on the 'N' Gauge Bassenthwaite Lake really stood out, simply because the water has been reproduced to an extrordinarily realistic level: 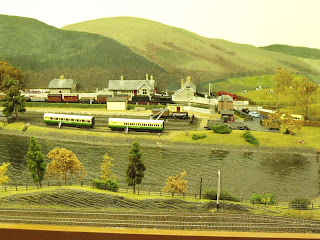 This view epitomises the natural splendour of the Lake District. 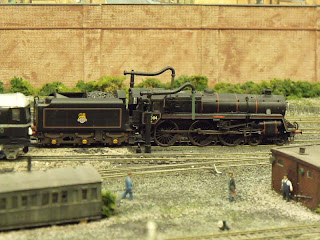 To make a change from photographing a BR Standard 5, I photographed this .... oh, not again! 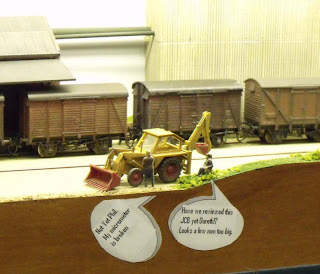 A quiet moment on Sodam Hall. The captions underneath the JCB apparently refers to certain writers at Rail Express, a magazine that prides itself on removing every last vestige of fun from the hobby of modelling. Everything but everything must meet their exacting standards - although they've never explained that a model of a diesel loco powered by an electric motor can hardly be described as prototypical. How does that work, then?


However, the show itself is not the main point of this post (oh, so there’s a point? That’s a new one …) Our neighbour on the Ten Commandments stand were Alan & Claudy from a new enterprise known as Modelmates Weathering Spray Dye. Weathering is a tricky area; you’re either good at it or you’re not. I fall into the latter category, so I’m always interested in any new materials or tools that will help me out in this department.

Modelmates use aerosol cans (there goes another polar bear*) filled with a coloured dye, not paint. This means it can be sprayed on in the usual manner, but the biggest difference is that it can be worked in and wiped off with a moist tissue. This sounded interesting, so I spent a significant part of the day trying out varying techniques. 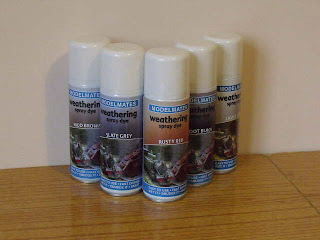 The company was actually set up to provide film and TV producers with suitable materials for temporary weathering and scenic effects, where real life weathering and distressing would be impractical. You need a spotless train to appear old and dirty in a period film? No problem; get down and dirty within a couple of hours, then in the morning wash it off and it’s as if it had never happened. Bit like being an MP, but morally acceptable.

This technique was used back in November on The Nene Valley Railway, when film producers set about recreating snow scenes for the upcoming remake of Murder on The Orient Express. (Full story here). This will be an ITV adaptation of the original story in a Poirot investigation format, rather than a like-for-like remake. Several tons of fake snow arrived by truck in order to recreate the snow covered railway tracks that blocked in the train during the critical murder scenes when the frustrated passengers pooled their resources to stab the Train Manager after 7 hours of non-communication. Sorry, I’m getting my stories mixed up – I’m thinking of Murder on The Eurostar Express. This must have cost thousands of pounds – bet they’re kicking their accountants through the door now. 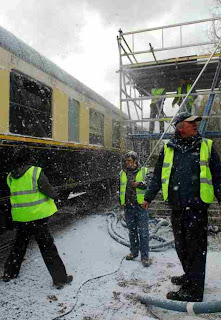 “I told you we should have waited another month; now

there’s half a million tons of the real thing out there!”

If I may digress from the point here as is customary, then the new film should be well worth watching. The NVR was able to provide the original Wagon Lits coaches without problems, as regular readers of this column will be aware. Unfortunately they don’t have any serviceable foreign locos, which resulted in Standard Type 5 73050 City of Peterborough being given the role. In order to make a Standard Type 5 look more at home in Belgrade (where else would you get a statement like that?), the film makers whacked a huge headlight on the smokebox door and removed the BR numbers to leave just 305. Clearly this is a big budget production. 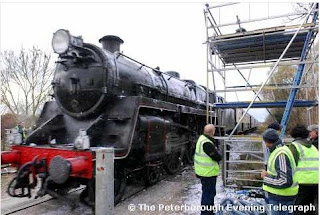 
(Photos from filming by Ben Davis at Peterborough Evening Telegraph)


More photos from filming may be seen on the NVR Gallery pages, whilst photos of 73050 steaming away in acres and acres of real snow may be seen in my photo gallery or in the Winter Wonderland video. If ITV would like any of this footage, please get in touch with an envelope full of used tenners, and we’ll talk.

But back to the point - the range of colours by Modelmates covers a pale sandy brown up to sooty black, with, appropriately enough, the most recent addition being snow – because none of us can get enough of that at the moment.

Now I have to say I was a little sceptical when I saw the dyes, as so many instant weathering materials have popped up over the years, and generally, they’re not up to much. So, Alan handed me some tins, I took a load of stock off our stand and began playing. And it’s impressive stuff, it really is. Whilst rolling stock is an obvious target, my main interest is in weathering buildings. The new old-style brick factories that Ten Commandments have produced look great, but I wanted something that could age them and provide a timeworn, rundown appearance. These dyes are ideal, because there are two main ways of applying them.

For a light dusting of background weathering, the can is held about a foot away and passed over the required area quickly until the required amount of dye is on the model. For detail areas, such as protruding stanchions, doors and underframes etc, the can should be held a couple of inches away and sprayed quite heavily so that the area is swimming in the stuff. Then, with judicious dabbing with a slightly dampened tissue, the dirt can be worked in to the required areas to create a build up of muck. The dye dries to a powdery matt finish, thus recreating a dusty look that is remarkably effective. For greater effect, the area can be resprayed and re-wiped several times, and the layers will build up, just like the real thing. I plan to try different dyes out on various old models from the bits box, and here is my motley collection: 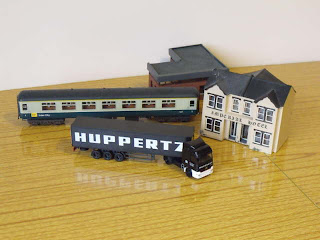 In the meantime, more information can be gleaned from the Modelmates website. I’ll be working with the dyes on the demonstration stand with Ten Commandments at the Doncaster Model Railway Show on 13/14 February, so come along and take a look. Modelmates will also be trading at this show, so you can even have a go and get some yourself. Right, I’m off to go and get down and dirty.