Heading For a Breakthrough ... or Breakdown?

New Year is here; at last a return to normality – such as it is. New Year’s morning was the ideal opportunity to shake off the stodginess and lethargy of the whole festive trial-by-turkey season and get some fresh air, a good walk and some photographs.

Naturally I headed down to the Nene Valley, as they were running some ‘winter warmers’ consisting of the LMS Fowler 4F that is visiting the line until October. Three return trips were booked to run, and as it was a fairly clear and crisp (i.e. icy and freezing cold) morning, presented ideal conditions for some good pictures. Four of these locos are preserved, although I can’t say how many are operational. Small tender engines such as these tend to be overlooked on preserved lines because of their more glamorous big sisters, so it’s great that 44422 was being given an outing. 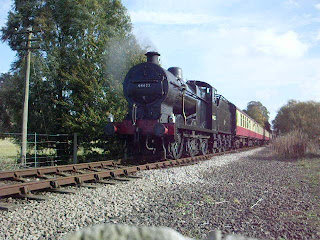 44422 approaching Lynch Bridge back in October.
For the opening shot I chose Castor, which has a shallow embankment. When trains head east on the NVR the loco travels tender first, and to my mind, that’s when smaller locos such as the 4F look much more natural than the mainline passenger locos in a similar position.

At the appointed time, nothing happened. 15 minutes later, I heard a diesel engine approaching – I wondered if the NVR was top and tailing again, or perhaps there’d been a failure and a class 14 was deputising. This is the sight that I was greeted with:
This was quite unexpected, a London Transport Sentinel diesel shunter with three men in the cab. (More can be read about this interesting loco here). I wondered if perhaps the Winter Warmers were somewhat under-subscribed, and to cut costs and the need for running round etc, the railway had decided to make life a little easier for themselves. I stayed put, getting increasingly colder as time pretty much stood still. Normally I’d just read a book that I always take with me on photoshoots when I know there’ll be long gaps to fill (currently Saturday Night Peter: Memoirs of a Stand-Up Comedian by Peter Kay if you’re interested). But after turning three pages and losing three fingers through frostbite, I gave up on this method of passing the time. The age-old photographers adage that ‘move and you’ll miss it’ was uppermost in my mind, but moving steadily down the priority list as the cold worked upwards. After another 45 minutes of chilly boredom, and watching more fingers drop off as I replied to various New Year texts, I decided to call it a day. Back at the car I heard the rumble of a diesel engine approaching, and legged it back to the track to find that the Sentinel was heading back, still with 3 people in the cab and no coaches or wagons in sight. Fortunately my shutter finger hadn’t yet fallen off, so I nabbed this shot as it rumbled past to Wansford: 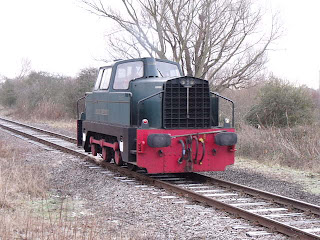 Therefore my theory must be correct – this was the Winter Warmer special, or maybe the NVR station staff had sent the lads down to Peterborough to buy McBreakfast. Why would you send a Sentinel loco down to McDonalds? Well, you’d never get a 4F and four Mk1’s into a Drive-thru, now would you? Keep up.

Seeing as I missed out on another chance to film steam at the NVR, I found this excellent video that was filmed at the Nene Valley in the early 1990’s. It’s certainly very different to every other railway video, and has everything you could possibly want in a film. Queen (as in We Will Rock You as opposed to We Will Rule You); a great rock song; steam locos and a sexy model - nice to have all my hobbies in a single film – it is, of course, Breakthru (or Breakthrough if you’re over 40) by the incomparable Queen.

Most of this film was shot between Castor and Lynch Bride, with Mill Lane overbridge appearing several times – all familiar locations to eagle eyed Grumpy Git Productions viewers. The rest of it was shot at Wansford tunnel. I took a friend down to the NVR to recreate the fantastic opening scene, but it didn’t work. Firstly, the British Transport Police Anti-Fun Department of Pointless Rules & Regulations politely and firmly moved me on. They didn’t object to her lying in between the tracks and walking down the permanent way; no, it was because she didn’t have a hi-viz jacket on while doing so. Then my ‘model’ moaned that the ballast had made her little black dress get dirty after 17 takes. That wasn’t my fault – in Breakthru (or Breakthrough) – the model lies still, and gracefully rises to walk down the tracks. Whereas Chloe kept twisting round “because I can hear a bloody train coming.” I tried to assure her that a train wasn’t coming, and even if it was, then if she would lie still it would pass right over her anyway. “Just lie there completely motionless. Like you do every other night of the week.” Actually, I didn’t say that, I just thought it. Even I’m not that stupid – and I don’t want spherical earrings, thank you. I decided that tact and diplomacy were the order of the day instead, and sought to reassure her with, “You don’t get many to the pound down there anyway, so a train won’t hit them.’

Once I’d regained consciousness, I began to wonder if I’d said the wrong thing. Filming continued in an atmosphere best described as ‘frosty.’ Finally, when she did get up and walk (totter) down the track, a heel broke on the ballast; she slipped on to a rail, laddered her stockings and split her knee open. And of course, it was all my fault. It wasn’t the happiest of photoshoots I’ve ever been on, I can tell you. Even buying a Burger King on the way home didn’t improve the chill in the air. There’s just no pleasing some people. Next time I’m working with Kate Moss. 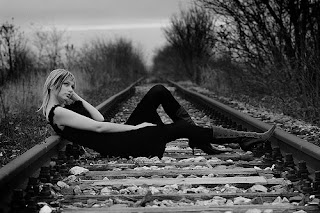 Having realised that she'd forgotten her petticoat, Bobbie wondered if waving
her red G-string at the driver of the 09:15 Green Dragon would have any effect.
(If you haven't read or seen The Railway Children, then this gag won't work. In that case, just admire the pretty picture because I'm not even going to attempt an explanation).

Health & Safety Warning: Grumpy Git Productions do not recommend walking / lying / posing on railway tracks. It's fairly dangerous, except at weekends when you have to lie in front of the replacement bus service, and the end result looks similar to the time your Granny slipped on the kitchen floor with a hot redcurrant and blueberry pie. GGP supports the Government's Safety Awareness programme: Be an idiot responsibly.