My ambitious plans for various projects over the Christmas holidays have proved, perhaps inevitably, to have succumbed to the inevitable lethargy that comes with the season – family visits, nights out with friends, over indulgence of food, drink and TV have all prompted a feeling of ‘can’t be bothered,' which is a pity because I just know that I’ll wish I’d made better use of time once back at work. But c’est la vie – it’s another right Royle Christmas holiday for me.

Therefore I present some of the projects that I would have done, if only I could have torn myself away from the box set of the original St Trinians DVD’s that I received as a very welcome gift.

Firstly, the cars to go along with my Iveco car transporter project. At the excellent Wigan Show back in December 2009 BC (before Christmas) I purchased these four lovely specimens that are typical of the trade-in quality-previously-loved rust buckets with flat batteries.  If you watch Top Gear then you'll be used to seeing top end supercars that can powerslide in 5th gear at around 185 mph.  If that's your scene, then stop reading now.  These are cars from the real world. Well, Rochdale. 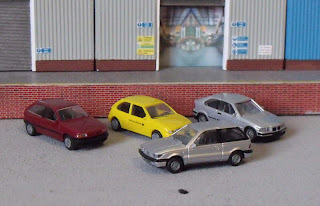 We have a Mitsubishi Colt (6 owners from new, full of dog hairs, collapsed rear suspension, low miles as it only goes to Lidl and back on Tuesdays). Then we have a burgundy Mk 2 Astra 1.4 with overflowing ashtrays, footwells littered with discarded McBoxes that carbon dating will put circa 1994 onwards, crumpled up copies of The Star and a big hole where the Sonypanasharp dikka dikka boombox used to reside. No spare wheel, because that’s where the 18 additional speakers used to be housed. The sump is missing after being ripped off when taking speedhumps at 46 mph, which is flat out when fully loaded with 12 teenagers smashed out of their skulls on Special Brew and Ecstasy.

Next up we have a BMW Compact. These tend to be lower-end company cars, thrashed for the first 55000 miles before being sold on every six months to people who want a BMW but can’t afford a proper one. Every warning light on the dash flashes away merrily, but fixing the problem will cost three times the cars’ value. So sell it on. It will be bought by a dealer for a snip, who will fix all the problems by simply removing the bulbs of the warning lights, quick polish and there you go.

Finally, the ubiquitous Ford Fiesta. This particular example is a German Company car for Deutsche Post, so that will have to go – probably a respray here. I’ll retain the yellow body colour, thus declaring this to be a 20-something’s girlie-mobile. Lots of cute stickers and teddy bears on swings hanging off the rear windows, glove box full of leftover cosmetics, small change everywhere that will amount to around £2.57, half a dozen biros that don’t work, the original Ford Fiesta manual that’s never been opened and is in mint condition (goes on Ebay), and around a dozen long-expired air freshener trees dangling off the make-up and beauty mirror (formerly known as rear view mirror).  You know the sort of thing I mean: 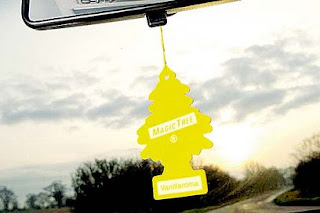 Also, on one notable occasion, a pack of photographs clearly taken at some sort of party involving lots of alcopops and scenes of – ahem – an adult nature that brought tears to my eyes. Clearly romance isn’t dead in Humberside. Let’s just say that she was lucky that I collected this car from the dealer, and whilst trawling through the vehicle for my £2.57 tip, came across said pack of pictures. Now I may be a Grumpy Old Git, but still retain old-fashioned moral standards to a degree, so I resisted the temptation to sell them to Hello! or OK! or Celebrity Bollocks!!! magazines and shredded the lot.*   Had they stayed in the car and gone through an auction, no doubt they’d be all over Facebook by now. See, I can do nice. So here’s a warning – when you trade a car in, clean it out first. Because you never know where it will end up.

A Renault Laguna would have joined these four cars, but obviously it wouldn’t start so I left it in Wigan to collect another time when I can be bothered. Clearly I’m starting to let my work influence my hobby a little too much.

Next along is a weathering project that is currently in the concept stage of development.  But all this creative writing has worn me out, so I'm going to watch another DVD first ... back later.

* Okay, they didn't offer me enough.  You know me too well.