Transported to Heaven - or maybe Hexham?

Having had a couple of days off work – use them or lose them – I’ve taken the opportunity to finish off a number of modelling projects.  The Iveco car transporter project had the final touches applied this morning, and I’m rather pleased with the results.  I plan to set up a proper photo session later on, but in the meantime here’s a couple of pictures to get started.  To do the vehicle justice, and to be prototypically accurate, I really need to set up the truckstop diorama and have the lorry parked up as I kill time (observe EU tachograph laws) with a coffee and pack of Custard Creams. 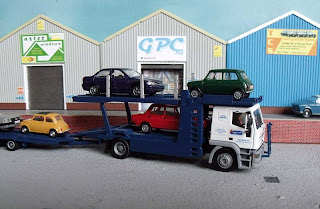 The next stage is to acquire some rather more suitable cars – the sort of junk, sorry, ‘quality, previously cosseted automobiles of distinction’ – that we generally cart around the country, and make up a small diorama to display the truck.  It will need weathering given that it only gets washed a couple of times a year.  We’re a very environmentally aware concern, and don’t wish to waste water on a weekly basis on a vehicle that will promptly go out and get scruffy again.  The fact that we all just want to get off home sharpish on a Friday night is purely coincidental.

For comparison purposes, here is the inspiration that was behind this project; my real life Iveco transporter: 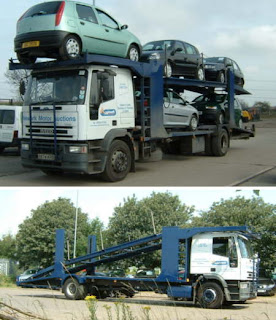 This truck has not had a happy time lately, as I’ve mentioned previously, but following two successive visits to a proper mechanic in Doncaster many of the issues that caused so many problems and breakdowns have been sorted out.  Indeed I took it out on Friday to Loughborough, Mansfield and Wakefield with a final blast back down the A1, and was amazed with its performance.  It still has its limitations, of course – a 180 bhp engine is woeful when you’re picking up 4x4’s and people carriers, but nevertheless, I noticed a considerable improvement in overall performance during the day.

Of course, there’s a sting in the tail, apropos the model.  Because the Iveco is now working well, and I submitted a good report about Friday’s performance, the boss has decided that the truck is worth holding onto for a while – so it has been booked to receive our new company vinyls to match the rest of the fleet!

From trucks to trains, and the lengthy project to respray the Contikits ‘N’ gauge train has finally reached fruition.  Having a loco and 8 coaches to paint up and decorate with company livery and logo decals wasn’t the most fun I’ve ever had, and became a bit of a chore towards the end.  I still can’t see more than 2 feet in front of my face after squinting at numerous tiny decals, and this post has been submitted in Braille.

Still, bar a couple of minor touch ups, the train is complete and ready for despatch.