Good king Grumpy last looked out
On the feast of Gordon
When the snow lay round about
So this is global warming.


It’s ironic that in the same week that our Gordy flew to Copenhagen to tell the world that everybody (except politicians, presumably) should stop flying in order save polar bears, that I awake to find the ice cap has actually moved into my back garden.  Even more ironically, I’d only just got the Grumpy Git Christmas Special wrapped up (did you see what I did there) when I find out that the most perfect Christmas weather conditions were outside my door ready for the taking.  Not one to miss an opportunity, I decided to jump into the car and once again head down to the Nene Valley Railway for a spot of seasonal photography.

Unlike previous visits, I didn’t have a plan as such – just grab as much film and photos at favourite spots as possible, as there is no way of knowing how long these conditions will last.  The weather was a dream – clear skies, a low winter sun and in the countryside there was a covering of snow several inches deep.  It was real Christmas card stuff, and the only downside was that it was cold.  Actually, it was bloody freezing and you need to be soft in the head to go hiking off down the Nene Walk for a day, but this was far too good a chance to miss.

Things went awry for the Santa Specials before they even started, as the snow, which was nice to look at, had frozen up several points and the level crossing gates mechanism at Wansford.  Consequently the first train out was 40 minutes late, and this had a knock on effect during the day.

My walk took me through the real countryside of the Nene Walk, which resulted in the thick snow coming over the top of my boots, melting into my trousers and as a result, filling my boots with water.  I hadn’t seen that one coming, but too late now.  Anyway, you’re supposed to suffer for your art, so I squelched onwards.  In the end I got to Ferry Meadows Station, some 5 miles trek away, and gradually worked back through the stunning vista of the winter wonderland.  Although the sun was out, the temperature hovered around zero all day.  Great for my pictures as the scenes weren’t melting before my eyes, but not so good for my feet.  Now I know how Captain Oates felt when he said, “I’m popping out to photograph a Standard Four lads; I may be some time.”

Although five trains ran during the day I only managed to photograph and film four of them, as the very late last run would take place after dark.  As it was also the final of Strictly, I filmed the fourth train and headed back for home.  Some pictures of the day are below, but the rest need to go into an online album.  Iain Robinson suggested I set up a Flickr account a while back – an excellent idea, and one I plan to get to stuck into during the Christmas holidays.  In the meantime: 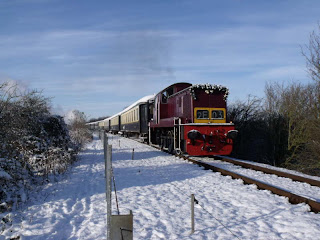 Class 14 heads the first train out of Wansford - 40 minutes late, but well worth the wait for this shot. 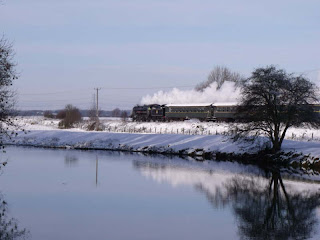 73050 on the return to Wansford, nice reflections in the river. 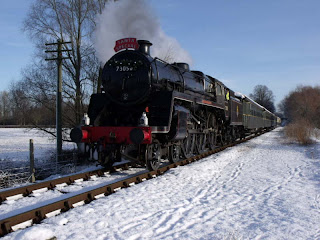 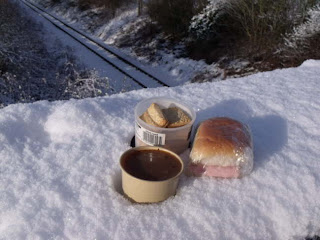 I was most impressed to find that Mill Lane Bridge came with cupholders for my lunch.  Unfortunately, this meant that my coffee was cold after 3 minutes.  You can see from this picture that I really know how to live when I'm out on a photoshoot.

I'm back home and part of me is almost thawed out - who knows, maybe I'll do it all again tomorrow.  I was going to stay in, put my feet up and watch tele.  But with Gordon jetting off to here, there and everywhere, I'd best photograph the snow before it all disappears .....