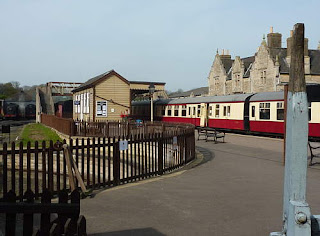 A typical summer holiday afternoon at Midford, S&D.
The spirit of Evercreech Junction was recreated in Cambridgeshire when the Nene Valley Railway held a 1950’s Somerset & Dorset event on Sunday 25th April.  I’d been looking forward to this mini gala for some time as it would offer a number of interesting photographic opportunities that don’t occur during regular running days.  For that reason I decided not to undertake any railway duties on Sunday as it would enable a day of linesiding with the camera instead.  I therefore planned out an intensive schedule so as to maximise locations and not miss too much of the action. 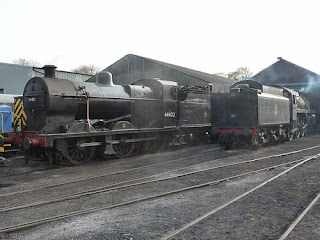 44422 and 73050 simmer in Saturday afternoon sunshine.
The line up was an interesting one – Fowler 4F 44422 and Standard Five 73050 would haul the passenger trains, consisting of a six-car blood and custard Mk1 rake, including a specially created Club Car for dining services.  For authenticity, 73050 had its City of Peterborough nameplates removed, and both locos were weathered to give a work stained appearance.  Recently arrived J94 Austerity Tank 22 Lord Salisbury would be making her debut in service on the Nene Valley, and I was particularly looking forward to the sight of this loco working the freights.  Although not an S&D loco as such, No. 22 is similar to the many industrial locos that used to work at a colliery on the line.  Finally, BR class 14 D9516 would be undertaking some stock movements and shunting duties to add variety. 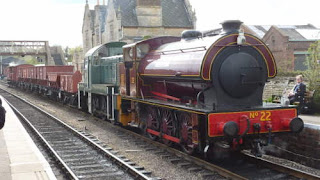 22 and D9516 look at home on a rake of coal wagons.
TTI Carl looks equally at home on a platform seat, taking a well earned break!
Interest wasn’t just confined to the trains themselves, as much thought had gone into creating the S&D atmosphere.  Wansford station became Midford, with all platform nameboards and even the signalbox altered for the day.  Vintage timetables were displayed and specially printed Edmonson tickets were issued to all passengers.  The continental coaches and TPO vehicles were banished to Orton Mere so that they would not spoil photographs – a nice touch.  The station must have looked convincing, because when I was working in the booking office the previous day a lady looked around with much curiosity, and turning to her friend said, “You know, I’m sure it said on the website that this station was called Wansford!” 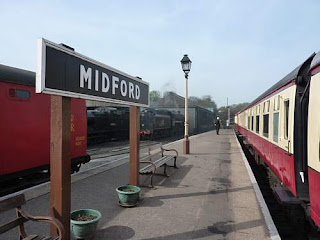 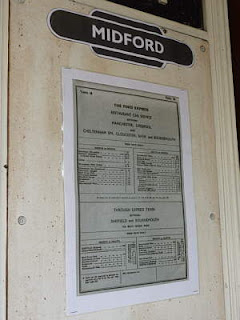 All passenger services would be hauled by 44422 or 73050, with locos being turned at Wansford on the turntable to permit some rare boiler first running eastbound to Peterborough.  The turntable operation was publicised, as it would be of interest to the expected crowds being such a rare spectacle on any preserved line.  The highlight of the day would be The Pines Express itself – 44422 and 73050 double-heading a one-off non-stop express from Peterborough to Yarwell Junction, including the high speed dash through Wansford – a first for the line.  So you can see why I wanted to be out and about, camera in hand! 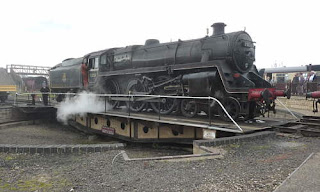 A grubby and nameless 73050 looked the part as she steamed onto the turntable at Midford.
Despite a gloomy start followed by an hour long torrential downpour that required a rethink about the early part of my schedule, the day gradually improved and by lunchtime was quite pleasant with good lighting.  The filming would start at Peterborough, but I popped into Wansford first thing as Jayne had asked if I’d call in and take some pictures of her Club Car – a MK1 saloon laid out for dining services complete with table linen, fine china and even fresh flowers. 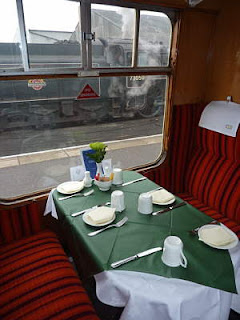 Pines Express Club Car ready for lunch service as 73050 gets up steam in the background.
It was essential to get this done before the hordes descended, and a stop at Wansford meant that I’d get some coffee down my neck at the café, and take the edge of the 06:15 start time.  Then scoot off and park up at Orton Mere before walking the length of the line with regular photostops, filming each passing train at my planned locations.  In the event, the substantial downpour meant substituting the dry shelter of Orton Mere for the open air of Peterborough for early scenes, but after 11:00 things steadily improved.  I ended up at Wansford for more photos before catching the last train back to Peterborough behind the 4F, then back again one stop to Orton Mere for the car.  This was a fortuitous move indeed, because the J94 had worked down with the freight and was added to the train at Peterborough for the return trip instead of going back with the class 14.   Thus I managed to travel on the first passenger train hauled by 22 which rounded off an excellent day on a high note. 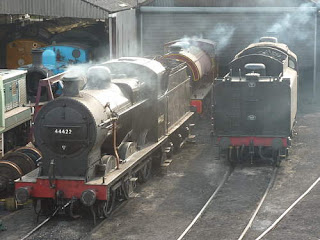 All three stars of the show in preparation for duty the previous day.
The Nene Valley Railway certainly deserves credit for hosting such a great event.  It just goes to show that you don't need a vast line up of prestigious locos to make an interesting gala - a well planned themed event with plenty of attention to detail works equally well.  Therefore I hope the planned video of the day does it all justice!
at 19:58