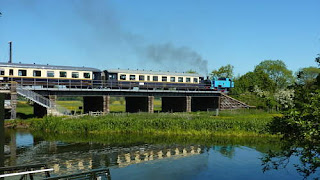 It was certainly a hot and steamy weekend, and that was even before I left the house to travel to the Nene Valley for my Booking Office turns on Saturday and Sunday.  Generally speaking, if the temperature in Peterborough rises above 70ºC then the good citizens all pile into their cars and spend several hours baking away in traffic jams that eventually deposits them at the overcrowded seaside town of Hunstanton.  Quite why they put themselves through this when they have the delights of Ferry Meadows on their doorstep is a mystery.

It’s not that difficult a choice … is it?
Saturday was a normal operating day, whilst Sunday saw the annual and very popular event that is Thomas’s Big Adventure. This entails Thomas working a six-car rake over the whole length of the line more or less non-stop.  Given the age of the participants, plenty of events take place on the train to avoid any tears, tantrums or boredom setting in – and there are also activities designed to amuse the children.  They think of everything.  At Peterborough the loco runs round, but is also refilled with water – and a neat twist here is that the children take part in this activity themselves by filling the tanks by hand with buckets!  It’s a great way of keeping their interest and up and can wear them out sufficiently for the return trip to be thankfully mellow … 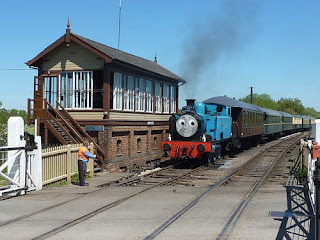 From an operational point of view the train was an interesting one as it consisted of two Danish open seconds, two Wagon-Lit saloons, a Belgian sliding door saloon and the unique Norwegian timber bodied coach with open vestibules.  I would love to ride the whole line on one of these open platforms sometime.  The Norwegian saloon is only used on special occasions and for film work – the vehicle’s X-Factor moment came in 1982 when it had a prominent role (along with the NVR as a whole) during some set-piece scenes in the James Bond film Octopussy.  With gun battles, knife fights, fisticuffs and a chase over the roof of the coaches before a car was crashed into the path of the oncoming train, the film convincingly portrayed a typical Saturday night in Peterborough. 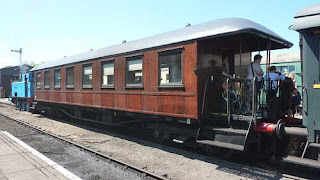 Meanwhile Class 40 D306 (carrying the Irish Mail headboard), and Standard 5 73050, now cleaned up and reunited with its City of Peterborough nameplates after various special events, operated the normal service throughout the weekend.  With the exception of the Thomas event, which was all pre-booked, the line was not especially busy – it was a hot day, so people decided to go and sit in even hotter cars in traffic jams on the road to Hunstanton as I mentioned earlier.  This meant that I could pop out and take some photos, which made a nice break.  To accommodate the Thomas timetable, a different working pattern was established at Wansford, the upshot of which meant that in between trains the spare loco was stabled at the signalbox on platform 3 road – the perfect location for pictures.  It also meant that a great shot could be obtained as the incoming train passed the stabled loco, with the green 40 nicely complementing 73050 and the crimson and cream coach rake. 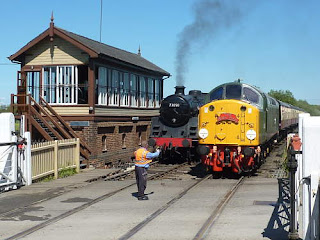 Later on I took a walk to see the latest visitor to arrive at the Nene Valley; however this is worth a post of its own in the near future.  When Thomas returned to Wansford, I have to say how pleasant it was to be greeted by the 350 passengers with big smiles, and we received very many thank-you’s from happy parents and excited children.  It’s always nice when people leave the line with happy memories, and the organisers of the Thomas event really do put an enormous amount of work in to ensure that it all goes off smoothly.  I’m glad that I wasn’t the one who had to handball all the catering supplies off the train, across two platforms and into the café afterwards, all in humid temperatures of 80ºC.  On top of all the actual work, I should point out that very few of the Continental coaches have opening windows, and the temperatures soared during the day.  It must have been almost as hot on the train as it would have been stuck in a Fiat Punto on the way to Hunstanton ….. Oh well, there’s always next weekend.
at 19:23