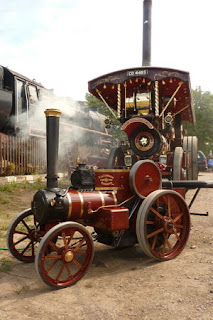 It was a hectic weekend down at the Nene Valley once again.  With the annual Vintage Vehicles Weekend at Wansford Station, a Mail by Rail event, an evening dining train on Saturday and a bus rally at Sacrewell Farm with vintage buses shuttling down to Wansford on Sunday there was something for everybody, not to mention normal train services trying to cope with the stultifying heat.
So where to start?  Well, I was ticket inspector on Saturday, and the booked train consisted of the Danish coaches hauled by the PKP tank 5485.  Unfortunately the windows in these coaches only open wide enough to pass a credit card through, so conditions inside the train resembled an oven.  Indeed, I took some yeast and flour on board the first train, left them in the Guard’s compartment and had a loaf of bread by lunchtime.
It has been consistently hot and humid in Cambridgeshire for weeks now, and the lineside vegetation is tinder dry and brittle.  It didn’t take much to ignite it, and after four fires it was reluctantly decided to replace steam with diesel locos until further notice.  The trusty class 14 driven by the ever trusty Thunderbird James was called out to rescue services, whilst the A1A Society members on site laboured under extremely uncomfortable conditions to get 31108 ready for the evening dining train that had been booked initially for 73050 City of Peterborough. 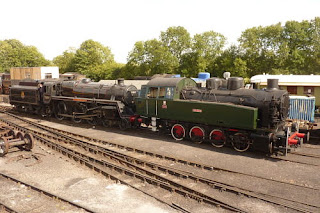 5485 & 73050 quietly head for the depot
as Billy Joel performs 'We didn't Start The Fire...'
The dining train was The Wansford Fryer, a service which picks up passengers on an evening run down the line before heading back from Peterborough to Yarwell non-stop, whilst passengers dine on fish n’ chip suppers that have been collected from Peterborough Station.  It is a service that requires exacting timekeeping – if the train is late at Peterborough then obviously the fish n’ chips will go cold.  And that isn’t good.
I’d stayed on after my turn as TTI to travel on the Fryer and assist with dishing out the meal.  A group of us – Team Jayne – set up the Mk1 coaches with tablecloths, cutlery, condiments and sauce baskets.  This is posh fish n’ chips; well, we are in the deep south after all.  Back home in Sunderland it’s fingers and paper bags, but I’ve adapted to my new environment quite well.  The meals would be served in two TSO coaches, whilst the four compartment coaches were available for anyone who just fancied a ride on the train.  For some inexplicable reason the TSO’s were marshalled at each end of the train and not coupled together.  This would mean someone (guess who?) would need to run the length of the train at Peterborough with the box of 60 fish n’ chip dinners and keep them warm.  What’s that old army saying?  Oh yes, never volunteer… 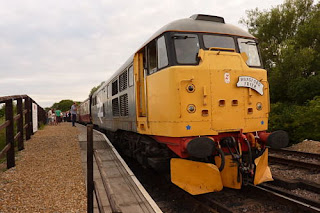 31108 at Yarwell after running round.  Nice headboard!
The train left Wansford 20 minutes late behind 31108 due to operational reasons that I have conveniently forgotten, so don’t ask.  Thanks to some nifty running round at Yarwell and some good thrash from the crew, we actually arrived at Peterborough only 4 minutes adrift.  The van was waiting for us, and I grabbed the first big box and legged it down the platform.  About halfway down, I suddenly wondered if I had the correct box ….. oh well, too late now to worry about that.  Fortunately it contained the suppers, and they were dished out to the diners on board.  As we cleared the tables on the return trip, I was pleased to hear so many complimentary remarks about the food – and proof of this was that there were no leftovers from any table.  Beat that, Gordon Ramsey! 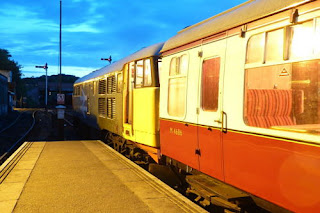 The end of a busy shift.
After the non-stop run, the train ran the whole service again to drop off passengers who’d joined at intermediate stations.  Then a final run back to Wansford where we arrived around 22:15, and saw the end of a hectic but pleasant day – and a chance to try out some nocturnal photography.  I headed for home and some shut eye, as tomorrow I'd be back for another go! 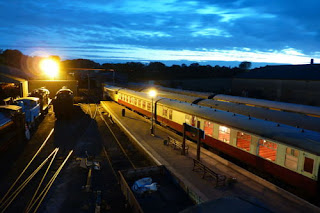