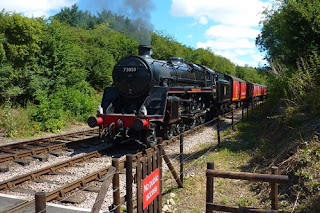 After a few hours sleep – well, time spent in bed trying to sleep in the sort of heat associated with market day in Basra – I was off again to the Nene Valley on Sunday morning.  I wasn’t on duty today, as I wanted to attend the Bus Rally that I wrote about here.  However, I also had another pet project on the go, which was filming some of the Mail by Rail event on the railway.
The NVR regularly operates working Travelling Post Office (TPO) trains that demonstrate how mail used to be collected, sorted and dropped off from trains in the days of steam.  In the sixties it became possible to post a letter in the evening and have it delivered to another part of the country the following morning.  Imagine if that were feasible today – well, the possibilities are endless.  You could post a birthday card the night before someone’s big day and they’d receive it over breakfast the following morning!  Instead of which it either gets crushed in the sorting machines or buried under 18 tons of mail left over from the last strike or can’t be delivered because your front door has three steps that can’t be negotiated for elf n’ safety reasons.  But never mind.  You can celebrate your birthday with an offer for the new Capital One credit card offering balance transfers for 41% interest or wonder how you’re going to fill the ‘Cash Your Gold’ envelope that always manages to get through any disaster striking Royal Mail. 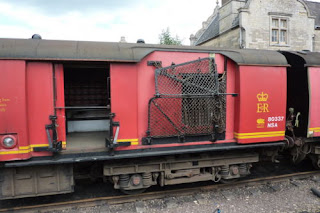 That aside, you can come and watch how mail used to be collected on the move.  Although The Great Central Railway and Didcot Railway Centre offer TPO services, it takes the NVR to do it justice.  And I’m not just saying that because I’m biased.  The NVR uniquely has two sets of lineside apparatus, one at Sutton Cross and the other at Yarwell.  Both sites have a public viewing gallery that offers a grandstand view of proceedings, and at each demonstration the train performs three or four run pasts so that the public don’t miss anything.  Access to the sites is on board the TPO itself, so visitors can really savour the whole experience rather than just watch a drop off.  All that for £4 can’t be bad, or free if you’ve purchased a day ticket for the railway as a whole. 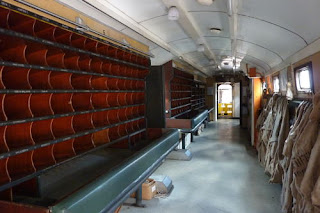 My plans for shooting the TPO went awry before I’d even arrived.  The previous day, as I mentioned here, the railway was affected by a steam loco ban between Wansford and Peterborough due to lineside fires.  The decision was taken to continue running the Yarwell services behind 73050 City of Peterborough and cancel the Sutton segments.  This worked out well for me, as I really needed a steam loco for the project I was working on.
I travelled to Yarwell on the first passenger train of the day so as to be in position for the TPO emerging from the tunnel later on.  I covered the mailbag drop and pick ups, then jumped the return service to Wansford.  There was a great photo opportunity here, as one of the visitors to the Vintage Vehicles event had brought an early GPO van and bicycle – and even dressed up for the part!  As our resident postie, Paul, was also in uniform from TPO duties, I was able to get some nice shots. 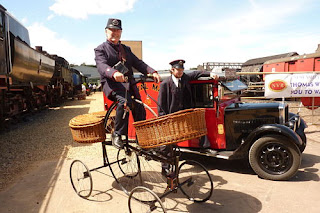 Following this I then headed for the Bus Rally at Sacrewell Farm before returning to film the afternoon TPO runs.  Having already captured the action shots earlier in the day I simply needed some shots of the train itself to add into the film.  The interior scenes on the coaches had been filmed in June so I was now ready to create the video.
As soon as I thought about filming the TPO I’d decided that there was only one soundtrack to use – W.H. Auden’s Night Mail, of course.  The prose echoes the beat of the locomotive and wheels on the rail joints perfectly, and the version I chose to use had a great musical arrangement that fitted in perfectly.  The end result is quite pleasing, as I feel it captures the atmosphere of the TPO whilst maintaining continuity and relevance to the narration.  So I hope you enjoy Grumpy Git’s visual interpretation of Night Mail.
at 22:01