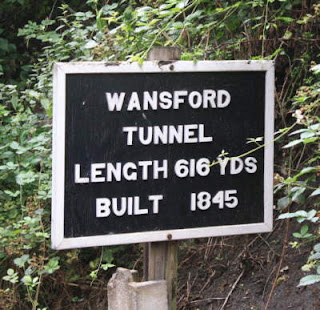 One of the first duties of the signalman at Wansford every running day is a walk through of the 616 yard Wansford Tunnel, in order to check that there is still a hole at the other end.  This intrigued me, and one of regular signalmen, Steve, was kind enough to allow me to accompany him on a walk through on Saturday morning so that I could take some photos.  I know that ‘tunnel interior’ doesn’t sound the most exciting of subjects, but I like things a little out of the ordinary.
I already have a PTS certificate, so access was no problem.  Duly armed with boots, hi-viz and a torch – don’t forget a torch – we set off on a very gloomy and wet morning.  The walk through duty also includes a visual check of the rolling stock parked up in Wansford Cutting; this is to ensure that all the carriage doors are properly shut and therefore wouldn’t swing open when a train was passing.
The tunnel itself is one of the longest in railway preservation, with a very tall arch that creates cathedral-like echoes.  It is dead straight all the way through, so the pinhole of light gradually grows as you walk towards it, just like being in a film!  Long abandoned rolling stock resides inside the tunnel; a couple of Mk1 coaches, a Mk1 buffet car still in blue and grey livery, a cannibalised class 14 and a couple of other wagons that may never see the light of day again. 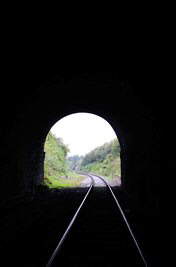 Two thirds of the way in, Steve showed me the treadle that operates a light operated ghost painted on the tunnel wall.  When working on the trains during family and Thomas days we always get the children to look out for this ghost; it creates an element of excitement and is a great icebreaker at the start of their journey.  With school trips we get the entire coach to keep an eye out; then shout and cheer out loud when they see it.  This creates a great atmosphere on the train, I have to say.
At the Yarwell end of the tunnel I took various photos as the line curves to the southwest in the steep cutting before we retraced our steps back to the most important part of the day – one of Jayne’s full English breakfasts at the Turntable Café!  Following one of these banquets, you’re ready for anything that the day may throw at you.  Steve went back to his signalbox for a long shift on our pink timetable, whilst I prepared to get very wet – it is August – on a photoshoot at Yarwell and Ferry Meadows Country Park.
I took the first train down to Yarwell Junction, hauled by 4F 44422 that has been out of service for ages awaiting repairs.  I needed to be here as the 4F would return shortly with the demonstration TPO service, and I wanted to be on hand to capture it emerging from the tunnel.  Predictably, no sooner had the nice, warm and dry passenger train departed then the first of monsoons descended.  Yarwell is a nature reserve and has absolutely no cover of any kind, bar a shelter on the tiny (but closed) station waiting room.  I decided to sit there, but once the train’s arrival was imminent and the rain eased off, I made my way down the path to the spot I’d chosen for photography.  Now safely out of reach of any kind of shelter, the second monsoon rolled in.  Whilst the train most notably didn’t roll in; annoyingly I could hear the loco whistling at Wansford every so often, but this wasn’t accompanied by any noticeable movement whatsoever. 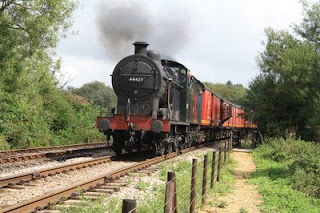 A good 20 minutes late, however, the TPO finally turned up, and I could almost forgive the delay as it coincided with a brief respite in the weather.  The train runs to Yarwell so that passengers on the TPO experience may de-train and make their way to the viewing area and watch three run pasts with mailbags dropped and collected each time.  Then the train picks everybody up and returns to Wansford, although I elected to stay put in order to get pictures of 44422 on a red and cream MK1 passenger train.  I don’t need to tell you that of course the heavens opened again, and when the passenger train turned up, it had class 40 D306 at the head because of operating difficulties at Wansford.  I wasn’t too bothered, the 40 in green livery looks great on the Mk1 rake so I was able to come away with some pleasing shots.
That was the end of my railway based shoot, as I was now staying on the train and travelling to Ferry Meadows for a landscape photoshoot to get some practise in with the camera and various lenses.  I’ll cover this in my other blog while I go and dry off …. 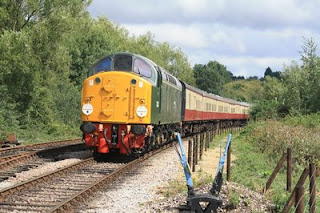 Many thanks to Steve for arranging the tunnel walk through and explaining all the finer points of the task that is one of the hidden aspects of railway operation that rarely come to light.  Fans of the tunnel may see it in action during some extended scenes during the James Bond film Octopussy.  The tunnel mouth also appears in the awesome Queen video Breakthrough that was filmed entirely on location at the NVR.
at 10:44