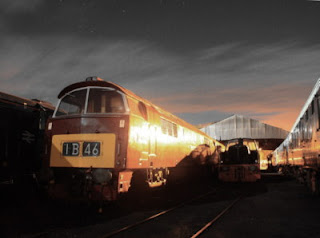 An experimental night shot of D1062 taken during War Weekend in September.  I liked the idea enough to go and buy a shutter release cable; so much simpler than holding my breath!
As I have a couple of days off work due to a recent wisdom tooth extraction that ended in a hot balloon taking up residence in my mouth, I’ve been using the time to catch up on things at home.  I've even found time for some sleep - until the painkillers wear off, at least.
For the first time in many months I’m not spending a weekend down at the NVR as I have commitments elsewhere.  However, I still managed to fit in a trip during the week as part of a photographic assignment for a lingerie shoot that I covered here.  During the shoot I was pleased to run into Paul, who writes the informative blog ‘A Personal View of The NVR.’  Paul is based in Carriage & Wagon maintenance and generally works on the railway during the week – consequently we’ve never actually met.  He was working on one of vanfit wagons that has kept him occupied for some time, so I strolled over for a chat while Sian was away getting changed between shoots.  It’s always pleasant to meet a new volunteer on the railway and put a face to the name, particularly when you’re following their work through blogs and can see the progress with each visit.  Without such things, few people would ever get to know what happens in different areas of the railway to the one you work in yourself. 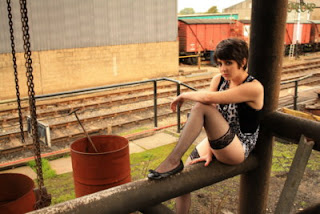 I'm sure you've spotted it already - but just in case you're not paying attention, Paul's Vanfit is second from left, partially hidden by the post.  Other interesting features in this picture are the rusty oil drums, lots of chain and the clever juxtaposition of the signal in relation to the shed.  Anything else I've missed?
I’ve added galleries to my Steamy Scenes website so that everything should now be up to date.  I still haven’t got captions done, and all I’ll say is don’t hold your breath.
Some time ago I uploaded a new video entitled The Blue Train.  I was busy and forgot to blog it, but essentially it took the premise of The Orient Express and covered a grand European rail journey.  In Cambridgeshire, owing to budgetary requirements.  Mostly filmed during the heatwave in June, there are some striking and colourful scenes in the film.  I’ve used the music before in an early film, but make no apologies for a second outing as it suits the concept and the actual train very well.
On Saturday I’m back at a model railway show as I’m demonstrating for Ten Commandments.  I can’t say that I’m overly excited at the prospect, as I had to turn down a paid photographic shoot for a 16th birthday party because the dates clashed.  Beards, bellies, BO and bullshit.  Bring it on!
at 15:12