The Witches of Wansford 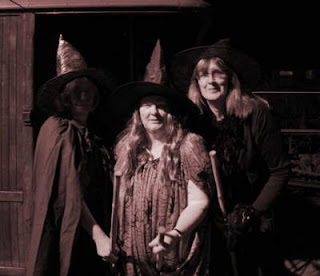 Saturday night was Halloween with Thomas at Wansford, and I went down as general factotum to help out here and there – my task was mainly to get the 150 odd participants on and off the special train at Wansford and Yarwell, then generally hang around; something I excel at.
After a thoughtfully provided fish n’ chip supper, I manned the ticket barrier to greet the arrivals, and I have to say the effort and time put into costumes – both adult and children – was incredible.  The station had been decorated by Jayne and her ever hard working team and certainly looked the part. 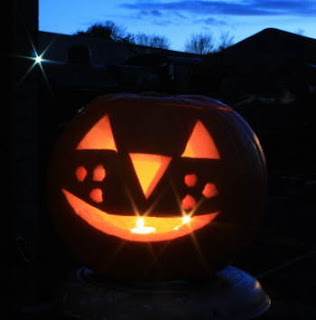 Thomas took the train through the haunted tunnel, and of course we really laid the ghost-who-lives-in-tunnel on thick and got huge cheers, ooohhh’s and general screaming from the carriages, although this had more to do with Jayne’s broomstick and Eddie’s backside rather than supernatural occurrences.
On arrival at Yarwell we got everyone off the train and those of us on duty were handed a Chinese lantern and told to set it off.  And how do we do that?  “Take it out of the plastic bag and set it on fire,” was the ever-helpful response.
Upon opening the plastic bag, I discovered that inside it I had a paper bag.  No, sorry, I stand corrected.  An orange paper bag with some string and cardboard in it, and some crudely applied black paper eyes and a mouth.  It was a pumpkin paper lantern. It wasn’t just an ordinary pumpkin paper lantern.  It was an incredibly cheap and naff pumpkin paper lantern that even Poundland felt that they were overcharging for.  By around 99p.
Eventually I managed to set mine on fire, although as Angie helpfully pointed out, setting fire to the outside wasn’t going to help much.  I’m not sure that I agree … 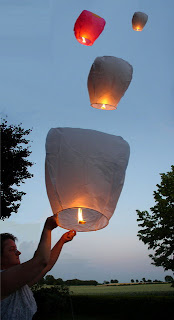 Chinese lanterns that you simply light and send soaring over the
Nene Valley in an artistic and dramatic manner.
Ours were nothing like this.
All ten lanterns eventually got lit and sent on their merry way.  One made it as far as the nearest carriage and crashed; four made it over the train and landed in the trees which presented the possibility of a lineside fire nearly in November (a first for any preserved line) whilst the remainder took off in spectacular style and sailed away into oblivion before landing on a Mondeo in Nassington and trashing the paintwork.
Now that we’d established a level, everyone got back on the train and returned to Wansford.  All passengers were helped to disembark so that they could go for food, party games and storytelling.  That was me done as I don’t do party games or story telling, except to my boss who wanted an explanation about the dent in the back of the artic I used on Friday.
So, I went and got the camera, as I fancied a night shoot around Wansford station.  Naturally I tried taking pictures of Thomas, but I needed a 30 second time exposure to capture the lighting, and no one could manage to keep out of the viewfinder for that amount of time.  The longest uninterrupted shot was 15 seconds, so that will have to do. 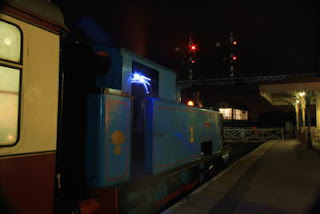 Away from the Halloween shenanigans there were some good opportunities, the best one being as Thomas shunted the coaches out of the station.  I managed to create this image of a train speeding through Wansford Station at night, which I particularly like. 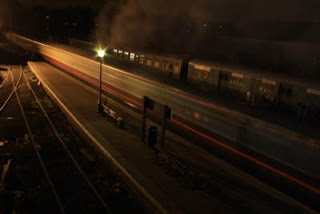 As the party wound down I sought out the three resident witches who had been doing the entertainment, food and  - pretty much everything really.  Mavis, Jayne and Pat had really got into character and were only too happy to pose for photos.  Well, they’re certainly different from my usual models I have to say, and they did have a tendency to fondle their brooms that made the photo session look more like an audition for a porn movie rather than a children’s party.  Jayne’s face lit up when she found she had a broom to straddle, and getting her to pose motionless for a long exposure shot wasn’t going to happen.  She seemed to be thoroughly enjoying some questionable antics with a broom between her legs.  I shall say no more.  Happy Halloween! 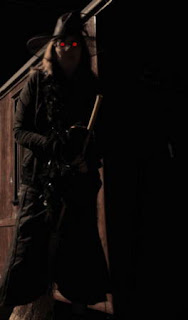 Getting the evil eye from Witch Pat 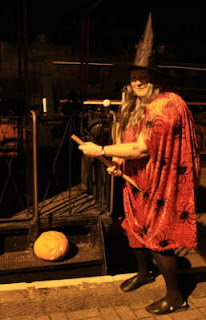 Jayne enjoying her prop way too much.
Sunday was the final running day of the 2010 season; so I went down to do booking office.  It was a dull, wet day and rather quiet, although as I had company in the booking office with Geoff, plus Liz and Percy next door in the shop, the time passed quickly and pleasantly enough.  I popped out to take a shot of the last train of the season departing Wansford on the final run – we were using Austerity No. 22, which made a fine sight heading down the line for Peterborough. 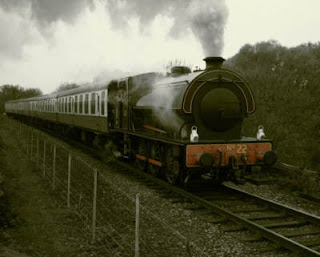 Well, that’s the season done.  Since joining the Nene Valley in February I have thoroughly enjoyed being part of something that manages to be interesting, rewarding, friendly and often wacky as my posts have shown.  I enjoy going down most weekends, have made many new friends as a result and come across a lot of very pleasant people both on and off the trains.
The railway takes a break from passenger service until the Santa Specials start on 28th November, although much behind the scenes work by the unsung hard working teams such as loco maintenance, Signal & Telegraph, Permanent Way, Carriage and Wagon etc continues unabated out of the public eye.  There is a special train next Saturday in connection with a fireworks display at Ferry Meadows, and I’m planning to be on it – so the story continues… 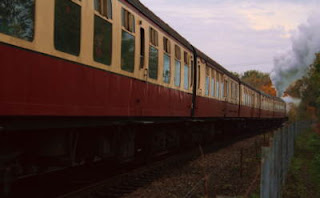