Can you believe that it’s October already? My mother will be getting the Christmas sprouts on before long. My mind is taken up with various projects currently in progress for the exhibition season, and most of these are now in the final stages. Over on the Truckstop diorama, here’s a selection of some of the smaller details and items of interest. Many lay-bys, at least on the A1, feature a number of very helpful signs to aid the public in these difficult times. You’ve parked up for a quick cuppa and rest and are then faced with this: 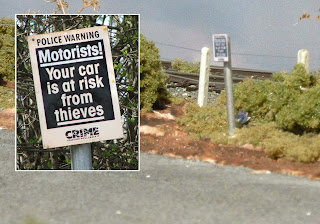 Now, whilst car crime is a hot topic in the UK, thefts from lay-bys would not appear to be a major problem. Firstly, a thief is, by definition, going to have to drive to the layby and leave their car in order to nick another one. Which makes it less of a theft and more of a part exchange – and if you currently drive a G reg Astra, and the thief comes along in a 54 plate Mondeo, could actually work in your favour.

Another popular sign at the moment is the Police ‘Load Theft’ sign. This warns truckers that the area is renowned for thefts from lorries whilst parked up overnight – and given the targeted thefts of valuable loads, can be expensive indeed. A couple of thoughts here – if the area is known to be a theft hotspot, why not actually do something about it, like put on Police patrols? Personally I’d park up a Tautliner overnight and fill the trailer with Life on Mars style coppers who hadn’t had a bit for a while – and just wait for the thieves to slash their way in. Then it wouldn’t be a load theft hotspot anymore, oh no! However, it’s against the thieves’ human rights to be bullied in this way. If it says Currys on the outside of the trailer, then it must contain plasma televisions, boom boxes, Wii’s and mobile phones. Otherwise, the thieves will take the haulier to court for misinformation and false advertising. 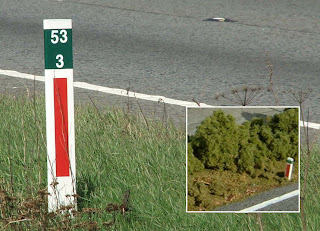 The milepost; again, very popular on the southern section of the A1, a road I obviously spend far too much time on if I’m noticing such things. It consists simply of a piece of plastic painted white, with a red strip of reflective paint and a green band with the mile markings noted on it. If you break down and give the AA the milepost information, then they know exactly where you are – the same applies if you need to report an accident to the Emergency Services. That’s fine for us oldies, but given that an awful lot of the younger generation don’t even know what county they live in, makes them somewhat irrelevant these days. I’m not being cynical here; here’s a quick quiz I created at work to test the under 21’s I used to work with. Ask them what county they are in, and the principle city of that county. Then get them to tell you what each surrounding county is, and the relevant principle city. You’ll be amazed / shocked / disappointed at the results. Unless you live on the Isle of Wight. 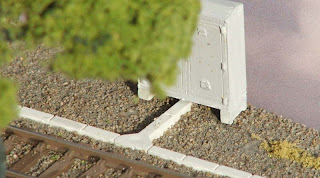 The lineside relay box – numerous examples exist, but by far the best I’ve found is this resin version by Unit Models of Keithley. The moulding is crisp and clear with hinges, doorhandles and air vents accurately reproduced. This product ties in well with the cable trunking; just remember to install some trunking from the lineside to the relay box! I’ve lost count of the number of relay boxes I’ve seen at shows sitting in splendid isolation at the trackside. 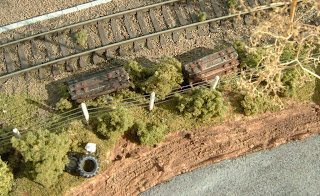 One of many trackside accessories available are these piles of discarded sleepers from a PW project. These are from Ten Commandments and come as two stacks as shown here, made from stonecast plaster. They weren’t painted as such; I simply gave them a number of mixed colour washes to gradually bring out a faded and weathered wood appearance. Watered down black, mid grey and dark brown were used in quick succession to allow the layers of paint to blend in with each other, and finished off with a shade of rust highlighting the chairs for the rails. A discarded tyre and rubbish have been dumped in the layby, sadly an all too common sight these days.