Sulzer Beat in the Swinging Sixties

This weekend was the 1968 Gala at the Nene Valley Railway – I might as well move in and live in a Mk1 coach to save on commuting! The gala was originally to have been held on September 12th, but was postponed as the visiting locos were not available. So, was it worth the wait?

The answer is an emphatic YES! It was an excellent event, very well organised and a lot of thought went into making this a grand occasion. The theme behind the gala was to take visitors back to 1968, the final year of British main line steam as the transition from steam to diesel was completed. I personally prefer this type of historically accurate gala to the free for alls of the recent diesel gala, for instance. Don’t get me wrong, I enjoy seeing all the locos come together in one place at one time, but the modeller in me prefers the recreation of a specific era, so that you are transported back in time – the war re-enactments and Beamish are excellent examples of this.

The foreign coaches were parked up out of the way, and the NVR used the crimson and cream MK1 set all day on an intensive passenger service. Spicing things up were the running of the former Royal Mail TPO set, complete with lineside mail-bag drop off / collection demonstrations that worked very well – rather better than the current 21st century mail service we’re not getting from Postman Pat and his picketing cat. Now that the season for preserved lines is all but over, might the NVR give some thought to taking on the Christmas mail delivery service? While you ponder over that, back to the actual gala, which in addition to the TPO also promised to run some freight trains to add in to the enticing mix. 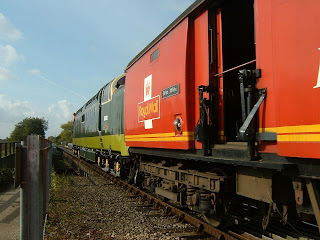 Last posting day before Christmas - July 5th, 1978.
The loco line up was promising, and the combination is unlikely to be repeated as various engines are leaving the line. Class 25 D5185 was a last-minute replacement for a visiting something that failed prior to the diesel gala – class 20’s I believe – and has stayed on, which is great, as I love these locos. I think it’s based on the Great Central Railway. Resident class 40 D306 would be performing, along with D9009 Alycidon that has spent the summer on the line, but departs during the week for Barrow Roundhouse. Consequently this would be Alycidon’s final appearance and I wanted to get some good quality filming of it in action.

Steam locos would be resident flagship Standard type 4 73050 City of Peterborough – a loco that Grumpy Git Production’s viewers will be very familiar with by now! Also getting up steam would be Thomas The Tank Engine, thankfully sans face but still otherwise bedecked with the accoutrements of his namesake. He'd be working the Yarwell end of the line, and didn't feature in my plans. Sorry. Top of the bill was visiting Fowler 4F 44422, following extensive repairs at its home of the LNWR Heritage Workshops at Crewe. It was these repairs that prevented the scheduled visit in September, but everything seems fine now, and the loco arrived on site last week.

The Met boys promised that the weekend would be overcast and dull, so on Saturday I departed in glorious clear and sunny skies for Wansford. Those guys really need to look out of the windows a bit more. My borrowed Subaru made it down without incident, and as I was good and early, everything was just being fired up or switched on, enabling some nice early morning shots that look great on film – very atmospheric. 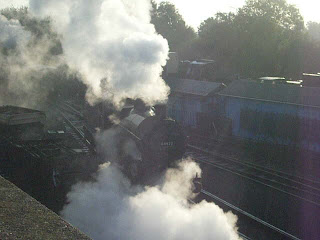 44422 oozes early morning atmosphere. (Screengrab)
A nice touch was the chalk messages written on the steam locos; you may recall or have seen photos of such adornments on BR in the final weeks of steam service. The 4F proudly proclaimed ‘I’m young really’ on the smokebox. A tactic I might try employing myself… 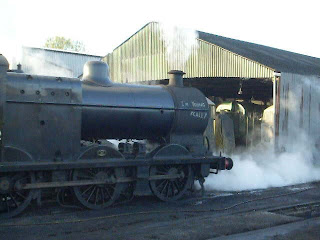 The 4F was rescued from the scrapyard. Wonder if I will be ...?
It would be a day of hiking, as the bike wouldn’t fit in the Subaru, and many of the superb vantage points I discovered during the Diesel Gala are only accessible on foot anyway. For this reason, I’d be moving around the first four miles of the route, almost all of which offer good views of the line, whilst still giving a good cross section of photographic points for variety. 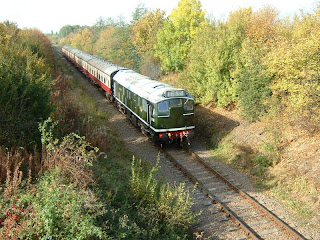 Things went well despite the complex timetable, and most trains ran to time. It wasn’t until late afternoon that the gremlins struck. I was waiting for the 15:20 passenger off Wansford, due to be hauled by the 4F, which was a ‘must-have’ shot. Nothing happened for a while, and I assumed the loco must be having issues. It must have been having pretty serious issues, because the train eventually turned up 35 minutes late with the class 40 hauling it. I decided to head back to Wansford at that point, as only two more trains were diagrammed, and I guessed that due to the late running one would be cancelled to allow the last train of the day to run on time behind the booked Deltic. On the way I planned to shoot the returning class 40 trip, as it would be double heading with the 25 that had worked the freight back to Peterborough. I almost got caught out, however, as to save time the 25 worked back to Wansford light loco with the brakevan in tow. Although I was some distance away from the line at this point, I heard it coming and managed to get set up and film across the field, thus adding a nice bit of variety to the day’s filming. I did, however, capture the 40 on the return leg at the planned location, before walking the last leg into Wansford.

On arrival my suspicions were confirmed. The 25 had been booked to do a short Wansford – Yarwell – Wansford trip with the TPO, but this had been cancelled, along with the 16:30 passenger to Peterborough. To make up for this, the last train of the day to Peterborough would travel first to Yarwell with the class 40 top and tailing Alycidon. On the return, the 40 would be detached and the Deltic would carry on as scheduled. This was good news, as I had a great location planned for Alycidon’s final departure and needed to capture the moment before the light faded too much – it doesn’t seem a week since it was daylight at 9pm! Well, it all worked out perfectly; the light held and the train departed on time. 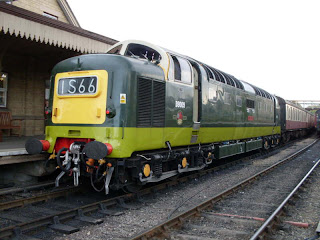 Alycidon reposes at Wansford before her final working.
This brings me to the end of an extremely busy and entertaining season on the Nene Valley Railway – and to think it all started simply because I drive past the line regularly for work, and one day thought, ‘I wonder what it’s like down there …’ The line doesn’t close completely for the winter; Thomas is running his Spooky Halloween Specials at the end of the month, and in December we have the Thomas hauled Santa Specials. As I’m not equipped with the ho-ho-ho gene, I think I’ll give these a miss.