As winter draws closer, thoughts are turning to various modelling projects that I have lined up. I have the car transporter project I mentioned here, but at Peterborough Exhibition, Dave handed me three biggish boxes with a fiendish grin and said, “Here’s something to keep you busy.” That sounded ominous, and upon opening the boxes, I discovered why.
A while ago, I resprayed and created promotional decals for a four car ‘N’ gauge commuter train set for Geoff and Alison at Contikits. They wanted a livery that would promote their business on a train operating on their layout. This was a bit of challenge as promotional liveries can be hit or miss, plus the design would need to be clearly visible and legible – not so easy in ‘N’ gauge. I'd previously worked on an 'N' Gauge lorry for them, so it made sense to utilise the branding that had been designed for that vehicle and maintain a corporate image:

A passenger train is quite a different proposition to a truck, however, and creating something dynamic and interesting posed a problem. I therefore applied both brain cells to the matter. Contikits, as the name suggests, are Continental model railway specialists and have an attractive logo consisting of a signal arm with a stylised ‘CK’ emblazoned on it. That would need to be worked into the design, and the livery created around it.

The coaches are double deckers, and at one end, each vehicle has a large blank space that could be filled with – something. A smaller blank panel resides at the other end of the coach. Okay. The basic colour of the cars would be white in order to take the decals, and to make them modern and contemporary, I decided on a diagonal upsweep at each end, in different colours. The sets run in fixed formation, so each upsweep would match the upsweep of the adjacent vehicle as shown in the photos.

The slogan I decided on would be ‘All Around The World With Contikits’, which summarises the business quite nicely. To reinforce the idea, each large blank panel would be filled with an iconic view of a different continent. The small blank panel would receive a globe made up of flags of the world. The concept was that the completed train would present a clear corporate image and show the origin of the product range in a visually interesting way. 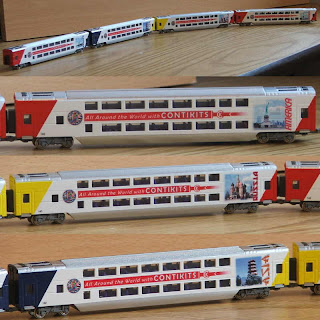 So far so good – the train was completed and despatched to Perth Exhibition. “Oh, it’s great, can I have another one?” After retrieving the bullet from my foot, I agreed. Which brings us back to Peterborough, and when I opened the boxes, this is what I found: 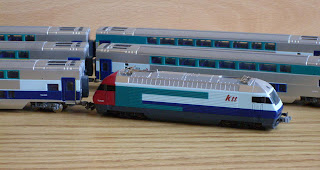 Oh goody! Two four car rakes and a locomotive! I can’t wait! The coaches are planned to be basically a repeat of the first set; but I’ll need to do something different with the loco. I think. I’ll let you know.

Why the odd title, I hear you murmur? Well, the train is the Kato model of a Hong Kong Kowloon – Canton Railway double-deck through train on the Hong Kong – Guangzhou route. Really. Just take my word for it while I put the car transporter back in its box.