The Iveco transporter continues to forge along, unlike its real life counterpart that once again is in bits up at Doncaster, much to the dismay of the mechanics who are trying to bolt it back together again. Presumably our accountants are also eagerly awaiting the subsequent bill with much enthusiasm. Still, that’s what happens when you have it ‘serviced’ for three years by an alleged mechanic who struts about his yard in cowboy boots and a Stetson. Yee hah!

The model is coming along nicely with most parts complete, so time for an update on the story: 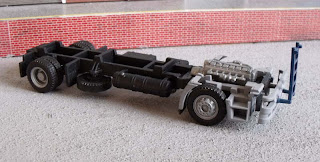 The Actros and Iveco components have been seamlessly joined, if you don’t look too closely. The engine is nice and clean, but to maintain a degree of authenticity, I’m not changing any filters until 2012. The ladder glued to the front bumper is to allow access to the front overhang of the top deck, although it rarely sees any use as you need to be a cross between a contortionist and high wire trapeze act to strap down cars at this point. 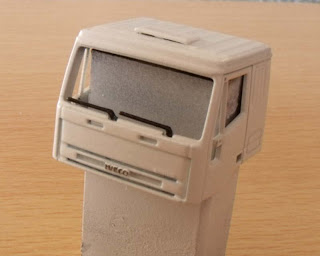 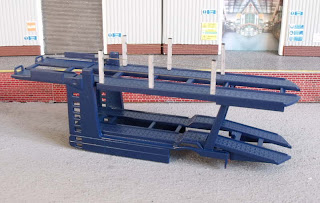 This wasn’t the easiest of paint jobs, given the amount of nooks and crannies that managed to avoid each successive coat of paint. As the lorry is a UK model I had to add safety rails to the top deck, because that nice Emma at Health & Safety is worried that I’ll fall off the side – presumably roll off in my sleep when taking forty winks in the summer. We don’t call it the sun deck for nothing, you know.

The original trailer was a double-decker, but we don’t have any of those, and just use single deck trailers like this. Not that I can actually use them, given the enthusiasm of the Nottinghamshire DVLA to find fault with my class one driving skills. Driving too close to parked cars – my arse. Hitting a car is too close. Missing it is a success story is in my book. And given that I was in narrow high street lanes at the time, if I’d strayed over the white line for a bit more space then no doubt I’d have been done for impeding the flow of traffic, which is what happened the previous bloody time! There’s just no pleasing Civil Servant box tickers these days. As my instructor told me after the last attempt, “You have no problem handling or driving the truck. You just can’t pass the test!” Surely one should cancel out the other? But not in the world of pen-pushers, it would seem. Anyway, I’ll leave that there, or it might just come across as sour grapes. Which I’d be happy to deliver to the DVLA for Christmas, but only in a rigid.

Where was I? Oh yes, the trailer - consequently a bit of surgery was required. A nice touch is the separate loading ramps, which can just been seen poking out the rear, painted aluminium. The correct numberplate for the Iveco has been added as well. 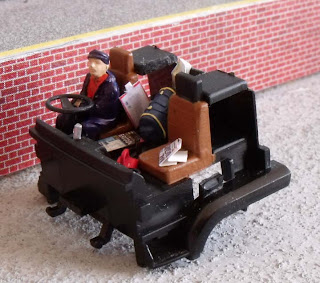 Home from home. It looks a bit messy, but I’m assuming that I’ve just come back to it after a day off, and Carl took it out yesterday. Yes, there’s a prototype for everything. I followed the real thing as closely as possible, hence the tan coloured seats, driver in company colours and various detailing bits, such as my workbag, flask on the dash and the red battery charger for starting cars with flat batteries (most of them). Items such as the road atlas, hi-viz jacket hanging on the rear bulkhead (I don’t wear it as it doesn’t match my outfit), newspapers, clipboard and paperwork come from the excellent Ten Commandments HGV detailing pack. The same pack also provided the tax disc and operators licence that are attached to the windscreen, an incredibly fiddly job, but really makes a difference to the completed model.

All that’s left is applying the decals that I knocked up using Crafty Computer Papers’ waterslide decals – however, I’m waiting for the delivery of varnish before this can be accomplished.