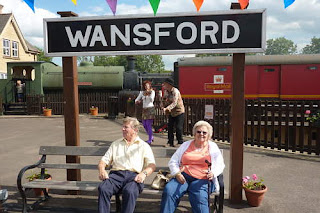 Saturday was family day down at the Nene Valley Railway, an annual event consisting of a beer festival as well as entertainers and activities for the children at Wansford Station.  It looked like a case of odd bedfellows to me, as the idea of a family day doesn’t seem ideally suited to a beer festival!  Perhaps it could be called ‘Compromise Day’ – as Dad gets steadily hammered on pints of Bishops Finger or Wags to Witches in the beer tent, Mum is letting the musicians and entertainers keep the kids happy over on the platform.
Well, the event was successful enough, if a little on the quiet side – possibly due to the start of the World Cup shenanigans.  Most beer festivals were probably taking place in people’s living rooms, fuelled with cheap supermarket booze rather than carefully brewed Fursty Ferret.
So what was on offer, then?  A free Routemaster bus service connected various participating pubs in Peterborough with the railway itself, and once at Wansford the wandering minstrels Pennyless, who are seen here with Thomas who was shunting the yard for the children’s benefit, serenaded visitors.  Pennyless also performed live on one of the trains; quite an achievement to keep their footing and play note-perfect in a lurching Mk1 coach! 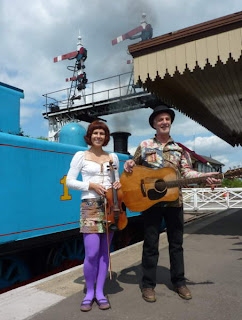 A pair of entertaining and talented stilt walkers called Phillipe-Phillope (flip-flop – geddit?  It took me three days so don’t worry) kept the audience impressed with their repertoire of juggling and cycling antics, and rather surprised the passengers of one bus load by knocking on the windows of the top deck when the Routemaster arrived!  They clearly thought that the Nun’s Ruin was more potent than anticipated … 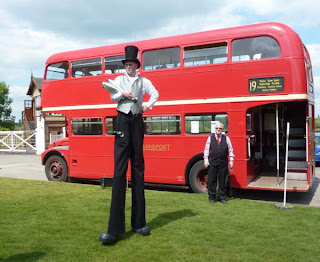 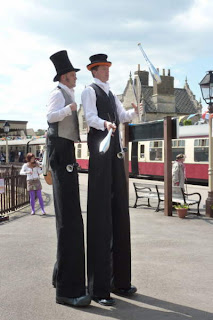 In addition to all this, the railway was also running travelling post office demonstrations throughout the weekend.  These utilised 31108 with an authentic rake of postal vans, and recreated the days of collecting and sorting mail by rail.  Lineside apparatus is installed at Yarwell, and on each trip passengers detrain at the station and walk down the line to view three operations as the train runs up and down on several passes.  It is an interesting spectacle to witness, and as it was a quiet day I joined the afternoon train to film events.  I chose to remain on the train and film the mail collection from onboard – I’ll do exterior shots another time. 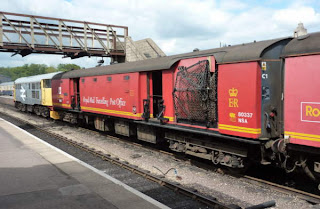 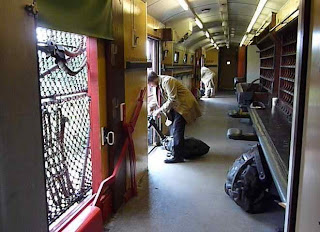 The timing of the operation is critical, and the mailbags fly into the train with some force.  This was at 25mph – back in the sixties, trains would have been travelling around 80 mph in all weathers.  The job for the postal workers was backbreaking as levers control everything manually – not a push button in sight.  The sorting coach, where letters and packets were sorted by hand into their destination dockets, was dimly lit and quite claustrophobic.  Working on the trains can’t have been much fun, and it was always against the clock to get the mail delivered on time.  How times have changed; the only mail that arrives on time now is junk mail from car insurance companies and special offers to sell my gold.  The TPO immediately brings to mind the classic poem Night Mail by W.H. Auden.  The prose is superb as it is written in perfect time to the motion of a train.  If you listen to an audio recording of the poem you can almost hear the wheels on the rails and the hiss of steam as the locomotive arrives at the destination. 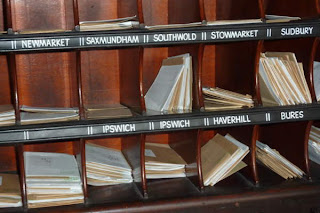 This mail has been waiting to be sorted since 1968.  I found a Christmas card from
my Auntie Lucy in this lot.  So she wasn't the mean spirited old bat I had her down for.  Sorry.
I rounded off family day with a complete trip up and down the line, acting as tour guide to a party of pensioners on a coach trip.  They were great fun and we got quite a party atmosphere going on the trip.  With all of this, plus my foray into modelling during the morning, I can’t remember when I last packed so much into a single day.  There’s always something different going on at The Nene Valley.
at 20:44