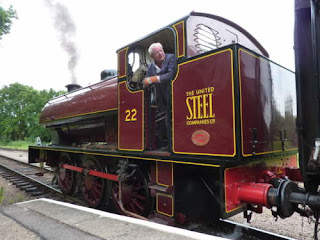 I’m pleased to announce completion of the film centred around the Austerity J94 that I wrote about below.  Back in April I captured some great footage of this loco on freight duties, but decided to wait until I had some decent passenger workings to throw into the mix.  As it happened, I was so pleased with the footage taken around Yarwell and Wansford last weekend that I ended up devoting the whole film to last weekend’s activities and the freight doesn’t get a look in.  Not that the footage is going to waste; I have a cunning plan in mind and it doesn’t involve a cabbage.
I was lucky to get a windless day during filming of these scenes, thus providing some excellent sound effects provided by No. 22.  These are particularly prominent during the climb from Yarwell to Wansford Tunnel.  This meant choosing a muted, gentle background score that simply links the scenes together rather than dominate the soundtrack.  Bach’s Air on the G-string seemed the perfect accompaniment to the peaceful countryside and branchline scenes.  So I present Times of Austerity, starring No. 22.