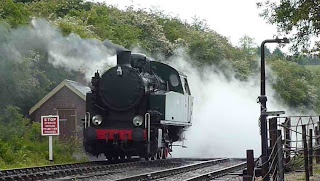 What do you do when your fifty-year-old boiler breaks down just before a bank holiday weekend?  There’s only one answer – call in a Polish plumber!  And that essentially was the problem down at the Nene Valley this weekend, with a three-train passenger service scheduled to run, but with the two principal steam locos (44422 and 73050) both sidelined with maintenance issues.  The Austerity J94 is out of action with big end problems thus compounding the shortage even more.  Whilst the ever dependable Thomas could be relied on for his Yarwell shuttles, the main line needed urgent assistance to provide the advertised service.  Unlike Notwork Rail, we don’t believe in simply giving up and going home at weekends with the vague promise of a bus to take you home.
Enter the ubiquitous class 14 diesels to work the Mk1 rake, and call in the Poles to provide us with a new boiler – in this case the recently overhauled PKP 0-8-0 Slask locomotive number 5485.  This would haul the Danish (DSB) set of coaches.  During the course of last week the loco has been named The Meg, but no one seems to know why. Or indeed, who Meg is.  This was great news for me as I’ve been waiting for an opportunity to film and travel behind this unusual machine ever since it emerged from the works in April after a lengthy rebuild.  5485 doesn’t generally work weekends, but instead works our midweek ‘Schools Specials’ with the four-car DSB rake.  These coaches are open saloons; for some reason the teachers of the schools groups prefer these to the compartments of the Mk1 stock!  I mean, what mischief could fifty schoolchildren possibly get up to in compartment coaches?  (Here’s a clue …) 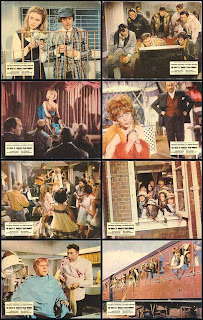 A period poster advertising The Great St Trinian’s Train Robbery from 1966.  A lengthy and highly entertaining chase involving a number of trains was filmed on the former Longmoor Military Railway - well worth watching, with a top-notch cast.  Perhaps because of these scenes, present day teachers prefer to keep their pupils where they can see just what the little darlings are up to!
As 5485 works these services it usually has weekends off when the other locos take over.  So it made a pleasant change to be able to ‘go Continental’ over the Bank Holiday period.  Meg is an interesting loco, and has a highly individualistic character of her own.  Built specifically to move long and heavy coal trains back home in native Poland, finesse is not one of her strong points.  Control of the loco is all-or-nothing according to the crews who work her on a regular basis.  Open the regulator a little to move away and nothing happens.  Open a tad more – still nothing.  A smidgen more, and Meg suddenly leaps into a life like an unsuspecting MP who’s just picked up The Daily Telegraph on expenses day.  Once on the move, 5485 truly has a life of her own. The long body overhang extends fore and aft over the eight close-coupled small-diameter driving wheels, which means that the loco bounces, twists and sways along all at the same time.  Regular crews take seasickness pills along for the ride.  Every rail joint and piece of pointwork is transmitted and magnified up through the bodywork and onto the footplate.  Standing still is an achievement in itself – grab hold of a handrail as the cab twists and lurches, then gyrate in time to the unpredictable motion in an attempt to stay more on less upright.  The whole crew resemble a party night down at The Bigg Market on Saturday night – and of course all of this explains the origination of the term ‘Pole Dancer.’  See, you’ve learnt something. 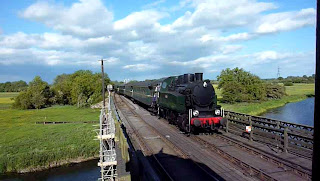 I spent all three days down at the NVR, with Saturday nominated as a filming day (rained dawn till dusk, naturally), Sunday as TTI on the Mk1 rake and relief booking office on Monday.  These turns allowed some breaks to get the odd bit of filming done, in addition to the very soggy photography session on Saturday.  Indeed on Monday I finished early enough to lurch down the line as far as Ferry Meadows on Meg’s last turn, in order to film the return trip back to Wansford.  It was a varied and enjoyable weekend, and I plan to produce a Polish film in due course.  In the meantime my washing machine has developed a fault, so as soon as the lads have finished coaling up Meg ready for next week, I’m off to have a word. 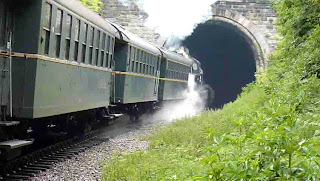