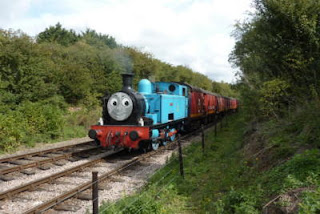 I mentioned last time that I’d been offered the opportunity to work on the Thomas and The Travelling Post Office (TPO) event this weekend, which offered something a bit different to my usual TTI duties.  Essentially I gathered that I was required for crowd control purposes as the event has its own Tour Group Leader (Marilyn) who takes care of the talky bits, and the TPO Group themselves handle the operation of the train.  So, it would be a nice easy day with only three trains to worry about, and all I had to do was escort the participants to and from the viewing gallery at Yarwell.  How hard could it be?
Well, anything that sounds too good to be true invariably is, and I really should have known better.  As there wasn’t much information about what would happen, I decided to wing it once the first load of passengers arrived for the 11:00 departure.  Passengers ride down to Yarwell inside the TPO coaches as part of the experience, but as they are parcels vans this means they are rather dark and gloomy inside.  Especially as the lights didn’t work because of a problem with the alternator!  However, everybody boarded and – we sat in Wansford.  I was aware that there was a complicated shunt movement going on, and this overran to the extent that we were some 30 minutes late in departing.  Not ideal when you’ve got 60 parents and small children confined to a parcels van by any means.
At length we arrived at Yarwell and our passengers alighted from the vans.  Fiona (another TTI) and I escorted the party down to the lineside apparatus that handles the dropping off and collecting of mailbags.  It took me back to school trip days, as we had to chivvy people along who kept stopping to go to the toilet / pick blackberries and stop to watch Thomas as he propelled the stock back to the tunnel mouth in readiness for the run up. 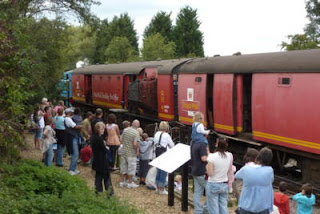 As I have the loudest mouth at the NVR I gave the group a short talk as to what was about to happen before Thomas did his three run pasts, dropping bags and collecting pouches on the way.  The audience was quite enthralled, especially the children who had a rare chance to witness Thomas in action from the lineside.  Normally they only see him at the station, so to witness a high-speed run is something of a novelty.  After the third run we escorted the group back to Yarwell and returned them to Wansford.  People were polite rather than effusive with thanks when they left; however we sorted out all the issues raised on the spot and placated those who were rightfully upset about the initial delay with some responsive action that kept everyone happy in the end.  Apart from a party of Americans, who just wanted to complain because – well, because they’re American and that’s what they do best.  Presumably if we’d been dishing out burgers on the train they’d have been happy, but basically they simply personified the stereotype American tourist that is often parodied on TV.  I don’t take Americans seriously as life is too short, so Marilyn handled that one.
Once the train was empty we had a chance to discuss what had gone wrong, and more importantly, how to build on the experience and improve it.  Now that I’d seen the operation I knew where the problems lay and how to sort them out.  By working closely with Marilyn we created a good PR team and worked off each other like a double act instead of getting in each other’s way.  This proved to be successful as the second and third trains ran very smoothly, and we received many compliments as passengers left us when we returned to Wansford. 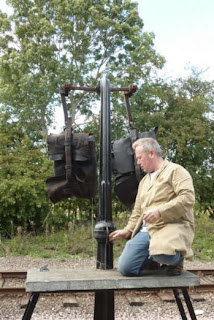 When Sunday dawned everything was in position, so we began the day on the right foot with an on time departure and a full (84 passengers) complement.  By now we were familiar with each other and our roles, so the operation was slick and professional.  The crocodile to the apparatus was the slowest part, but you can’t hurry a toddler who doesn’t want to be hurried!  To help out, the TPO crew held the train at Yarwell until the group reached the viewing gallery so that they wouldn’t get distracted as Thomas trundled past and hold up the operation.  I also discovered that I could use the opportunity to create a party atmosphere down at the gallery.  I began with an explanation of what would happen, then each time Thomas reversed the stock down the line, I asked all the children to shout ‘Hello Thomas!’ as the loco passed.  With three runs taking place I urged them to shout louder each time, because if Thomas could hear them, he’d respond in kind on his whistle.  This duly took place on the third run thanks to an arrangement with the footplate crew who joined in the fun to make it special for the visitors.  During the mail drop runs, I scrambled up the bank to get a few pictures before returning to my temporary role as Butlins Redcoat – clearly I’ve missed my vocation in life.  Or I just like the sound of my own voice. 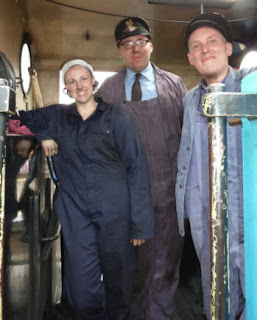 Each of the three trips loaded to capacity on Sunday which created a great atmosphere each time, especially the ‘Hello Thomas’ bit – the TPO crew told me later on that this could be heard all the way back at Yarwell Station!  Once the third run was complete and the groups returned to Yarwell, they had an opportunity to watch Thomas run round and get photos with him, and the TPO crew opened up the nets so that people could examine the equipment in detail that they’d just seen in use.  The train then left for Wansford, where the children had an opportunity to sort the mail into the original dockets inside the sorting coach; a great chance for more interactive fun that they enjoyed very much.
Overall, once the less than successful first run was over with, the event was very successful and up to the high standards of customer service we pride ourselves on delivering.  I was pleased with way that we acknowledged the problems and got together to tackle them head on in a straightforward manner, rather than shrug our shoulders and carry on regardless as some ‘service-led’ operations do all too often.  The end result was great teamwork all round, and more significantly, lots of happy and excited faces departing from the TPO coaches at Wansford.  That’s what makes being a volunteer on the railway worth doing in the first place.
So what next?  Well, next week a steam event is taking place and I’ll be here, there and everywhere, as it should be a busy and varied day.  More later!
at 22:05