Mingling on The Orient Express 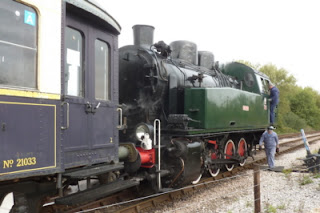 I don’t often get the chance to work on the railway during the week as I’m normally out earning a crust in order to pay for all the mistakes made by the Inland Revenue or whatever fancy title they now call themselves.  On Wednesday, however, the railway was hosting a meeting of the Peterborough Business Forum on board one of the trains to make a nice change from the usual hotel conference room set up.  Therefore, the NVR needed a representative from the railway who could meet and greet delegates on arrival at Peterborough, then accompany them on the journey whilst generally mingling and promoting the railway as a whole.  The role required somebody eloquent, calm, knowledgeable and friendly to undertake this task.  Unfortunately all the eloquent, calm, knowledgeable and friendly people were off on holiday or otherwise tied up, so I got asked if I’d like to do the gig.
I was delighted to accept another interesting and different facet of the railway’s operation, and duly popped down to Wansford for an interesting day.  The party would join the second train of the day at Peterborough, so I decided to travel down on the first service and be ready to meet people as they arrived at Peterborough.  This would allow plenty of time to get ready, as well as prepare the coach for the visitors on the way down.  The Managing Director of the NVR would travel down on the next train and officiate with a welcome speech before mingling with the group. 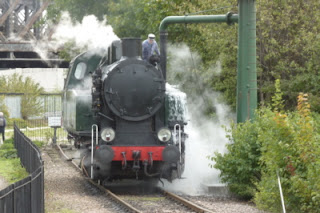 Stock for the day consisted of the Polish Slask tank 5485 with four DSB coaches for the public and three Wagon-Lits.  It was a busy day, as in addition to my group there was a lunch party taking up the second Wagon-Lit for a Ploughman’s Silver Riders Special, whilst the DSB coaches would host two school parties and the unsuspecting general public.
I travelled down the line with Steven who was preparing the lunch settings, plus Eddie who is also a TTI and had just popped in for the day.  At Orton Mere we were dropping off some cleaning cloths and a large roll of tissue paper.  The cloths were passed over TPO mail-drop style from the moving train, but the kitchen roll was too bulky to fit through the window.  So it got dumped at the end of platform, meaning that Old Arkwright would have to walk up for it. 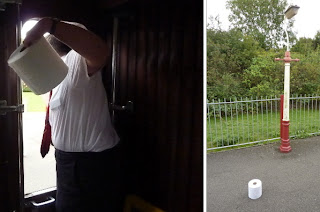 On arrival at Peterborough I had the chance to have a sit down and proper chat with Peter, Sue and Trudi who run the station on a regular basis.  Normally I only see them briefly when on TTI duty, as we pop in for a bit of banter during the 10 minute dwell whilst the loco runs round.  I’ve not actually been at Peterborough and watched a train leave before as I’m always on it!  The chance was too good to miss, and as I had my trusty Panasonic tucked inside my jacket as usual, I took some pictures and a nice clip of film as the train departed from the station.  For filming I always use a tripod, although on this occasion I didn’t have one as it wouldn’t fit into my pocket.  Something for Primark to pass on to their Quality Control department.  Instead, I found that resting it on a fence post worked adequately, although there was a slight list to starboard.  This was cured by folding up a Wansford platform ticket and resting the edge of the camera on it – I always knew it would come in useful one day. 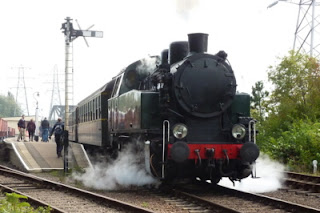 Once the train had gone, we got down to the serious business of having lunch, coffees and a good natter until the first delegates began to arrive.  Originally 12 people were expected, but that had risen to 40 by the day itself - a very good turnout for this type of meeting.  I have to say that without exception they were friendly and interested in what the railway had to offer.  The atmosphere was relaxed and informal, and they were clearly impressed at the idea of travelling in the Orient Express coaches (well, near enough.  I mean; they’ve been in the film so that counts).  The local paper, Peterborough Evening Telegraph, popped down for a group photo so I’m hoping that somebody has got a copy for my scrapbook.  I rarely get into photos as I have a face for behind the lens rather than in front of it, but as I was smart and had done my hair (well, washed it) I took my place in the line-up.
The journey was a good one and the delegates mingled with each other quite happily.  When the train departed from Wansford for the Yarwell leg, the atmosphere was good enough to give them the full Thomas treatment normally provided at children’s events.  The delegates were given the choice of ‘lights on’ or ‘lights off’ when travelling through the haunted tunnel – and they unanimously voted for ‘off!’  I primed them to look out for the ghost, and actually raised a bigger cheer and ‘oooooh’ than on most Thomas trips!  It certainly created a great mood on the train, and I can guarantee that you don’t get that in your business meeting at a Holiday Inn.  Unless you get locked in the linen store with a Polish chambermaid, but that’s a different story.  And it wasn’t my fault that all hotel doors look the same..... On the return journey down to Peterborough I gave an informal guided tour of the line and facilities – and not just because I have the biggest mouth on the NVR.  That is purely coincidental.  I was keen to promote Ferry Meadows and Nene Park as an integral part of a family day out on the railway, because the two go hand in hand so well.  The mood was great as the train rolled back into Peterborough, and everyone commented on the day as they left the train to return to their offices, or more likely, the pub.  Next year’s Forum hosts will have to work hard to beat our efforts!
The return to Wansford was ‘on the cushions’ in 1st class Wagon-Lit splendour, which made a nice change.  I couldn’t hang around when I got back as I was heading off to Kings Cliffe for a photoshoot – but that’s one for my other blog …
at 21:30