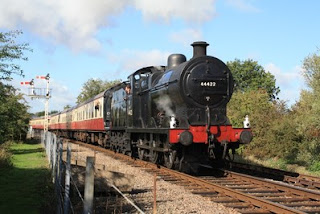 44422 leaving Wansford in the 1950's.
It was our autumn steam event down at the NVR over the weekend, and rather enjoyable I thought.  Rather than compete with the big Steam Galas currently on offer around the country, the NVR did everything in house with an emphasis on small and personal.  Locos in steam included the Fowler 4F; Austerity 22 and the Polish Slask tank loco 5485.  Passenger trains ran with the 4F and Austerity operating alternately on the Mk1 rake and 5485 on the DSB’s, resulting in prototypical consists.  Highlight was the operation of several freight trains hauled by the Austerity and 4F in between passenger duties.  Thomas was also in steam, sans face, operating top n’ tail shuttles between Wansford and Yarwell.  Our flagship loco, City of Peterborough, is out of service under repair so was not available for traffic, but was moved to the bay platform to facilitate cab visits.  This positioning permitted some great evening shots as the sun gradually descended on Saturday.  Finally the Bullied Pacific 92 Squadron was shunted into the café platform (known as the loco crew drive-thru!) for inspection by the public.  Members of the Battle of Britain Locomotive Society were on hand to discuss the loco’s restoration with interested visitors. 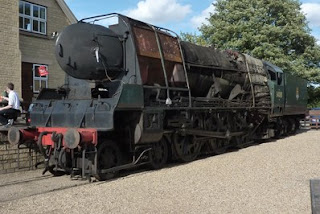 You need one hell of a tin opener to get inside this spam can.
My role for Saturday was TTI and the atmosphere was good with well-filled trains throughout the day.  Towards the end of the afternoon I was preparing the last passenger train for departure when a family group approached, led my Vicky Pollard in her size 39 tracksuit.  They’d bought tickets for Ferry Meadows because they wanted to go there for the day.  At 4:10 pm.  With their disabled mother.  I told them that as this was the last train, they’d only get half an hour at Ferry if they left the train on the outward trip and rejoined it on the return leg.  They weren’t happy about this, and complained loudly.  The only other option was to travel in the freight wagons, and then they complained even more loudly.  I suggested they simply upgrade their tickets and have a round trip.  No way; they weren’t going to spend anymore money than strictly necessary.  Need the rest for fags n’ booze innit?
I thought that was that, but got accosted again on my way down the platform.  “This is all a con you know,” Vicky Pollard informed me.  “We’ve brought our kid down ‘ere special to see Thomas an’ he ain’t ere.”
Oh for f…
I pointed out that Thomas was not only here; he was in steam at the end of the platform complete with nameplates and Number 1 on the tanks.
“Yeah but he ain’t got ‘is face on.”
“Madam; if his face is anything like yours then we can say thanks to the Lord for making it so.”  Okay, okay – I didn’t really say that.  I wanted to, but protocol and all that … instead of which I tried to explain about the steam gala; the fact that Thomas was here every other day of the year and that just for this weekend we remove the face and run it as an 0-6-0 shunting locomotive.  Just as it states on the website.
“We ain’t got no website,” was Vicky’s reply, although I think what she meant was, ‘I can’t read but I can watch my 54 inch TV what you bought me with your taxes.’
Fortunately, thanks to Vicky’s inability to tell the time I only had to put up with her group on the final train and not for the whole day, which otherwise was a great success. 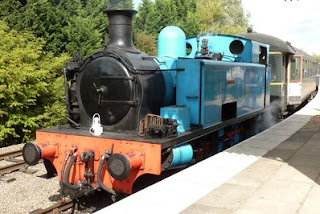 If it says Thomas on the nameplate but you can't read,
does it still say Thomas?  Discuss.
Sunday was a whole new experience for me.  I wasn’t on duty as such, but Jayne was doing catering on the trains and was desperately short of staff.  Short enough to ask me to help out.  The lunchtime train was serving Ploughman’s lunches in the Club Car; when it returned to Wansford it would be turned round for afternoon cream teas on the 14:45 service.  This was an excellent idea, and I’d seen how popular they were the previous day.
I turned up at Wansford nice and early in order to get some good pictures of the freight trains, before starting on the lunch service.  Only three of us were doing the catering, but we were well prepared and the Ploughman’s went out smoothly and successfully.  It was proper food service as well; plates, cutlery and crockery – the works.  None of your cardboard and Styrofoam rubbish on Jayne’s Trains at the NVR! 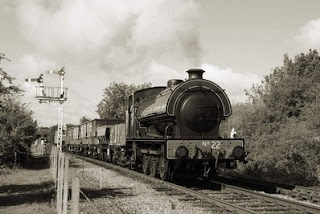 The cream tea service wasn’t pre-booked as the lunches had been, so it was all done to order.  With tea, coffee, scones and a choice of three types of cake the service was very ‘bitty’ and I’d have appreciated the services of an octopus as I tried to manhandle the teapots, coffeepot, milk pot, cashbox and take orders – plus take the platter with the different cakes around to show people.  Methinks I got the short straw …  It didn’t help that tea was the most popular option, and the teapots held around four cups before running out – and this got more problematic the further I walked down the coach because the walk back for refills got longer each time.  I also need to teach young Steven how to make tea.  He was fine with gnat’s piss, but the train was populated with lots of pensioners who know exactly how tea should be made.  Take away their pensions and heating allowance; confiscate tartan rugs and comfy slippers and you may get a glance of disapproval.  Dick around with their tea and you’ll never hear the end of it. 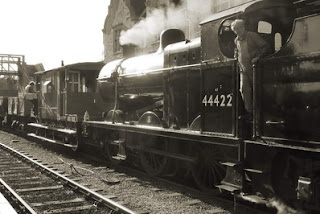 To complicate matters further, the adjoining coach had a party of 30 old folk on an outing – and they got a sniff of what we were up to.  Well, it would have been churlish to refuse and make them walk to the bar car where they’d get a Styrofoam cup, so we served those who wanted them as well.  Mark 1 coaches have never seemed so long!  We also began to run short of hot water so I was glad when Peterborough hove into view.
Despite the logistical problems everyone got served on time and only the last table served received cold tea – which we replaced with fresh cups at Peterborough where we had an urn brewing away waiting for our arrival.  Everyone was happy, and we even served a few bonus afternoon teas on the return leg of the trip to Wansford as well.
Working the trains makes you appreciate just how hard the catering staff work on a day to day basis, and you come away with renewed respect for what they do – very much the unsung heroes of the operation.  There’s talk of doing more of these services next year.  I think I’ll stick to eating the leftovers! 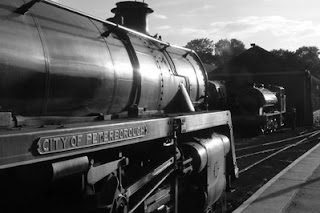 The sun sets on another successful event at the NVR.

The full photo set may be seen here as part of my Steamy Scenes Photo Gallery.
at 20:34