I’ve been sorting out old photo files and tidying up the computer hard drive, as you do during a British ‘barbeque’ summer when it’s chucking it down outside. I came across a file of pictures I took of my first serious attempt at layout building – as far as I can recall they were taken between 2000 and 2003 on a film camera and subsequently scanned. The layout was pretty large – 14 x 7, and occupied almost a whole room in our house at the time. Work began in 1995, and the layout evolved in fits and starts as is so often the case. By 2003 it was getting there, although the time lag meant that whilst some areas were quite acceptable, others were well below standard. Then there is the ‘just what was I thinking / drinking?’ moments when I see certain pictures.
In 2004 the layout was quite well advanced (in construction terms, not modelling terms!) when a house move signalled the end, as it was far too large to move. By now, many in-built faults had come to light, and it was kinder to put it out of its misery and start again, using the lessons and techniques I’d picked up along the way – perhaps one of the greatest pleasures about the hobby. After all, modelling is all about learning new skills, then developing them and fine-tuning as you go. So I’ve decided, for better or worse, to show various scenes from this layout, because not only did I learn a lot from building it, I also had a lot of pleasure, a fair bit of frustration and the odd surprise along the way.

When I build a layout, I give plenty of thought as to where it is to be located, then work out the era, the sort of trains I wish to run and the general environment around the railway itself. With 14 x 7 to play with, I immediately fell into the ‘Oh, I’ve got more space than I know what to do with’ state of mind that entraps the unwary modeller. I did however, have a clear view of the area I wished to portray. I have a great fondness for the railways of Devon, ever since a family holiday at Dawlish in 1980 – ‘nuff said, everyone? Fast forward twenty years or so, and I wished to encapsulate part of this area. Naturally I wanted full-length passenger trains, as well as a freight yard, parcels services and engineer’s trains. I not only wanted jam on it, I wanted cream as well and the whole lot silver-served to me by a nubile page 3 girl. This ruled out anything along the seawall, and left only Exeter as a likely prospect. 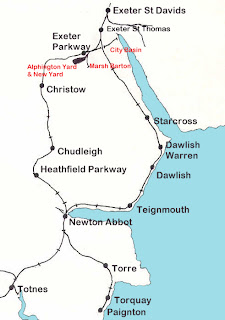 Research discovered that just west of Exeter lay Marsh Barton industrial estate, and this was rail served even in the late 90’s for scrap and oil. The short branch line was the stub of the former through line to Newton Abbot via the inland route travelling through Chudleigh. Although truncated, the remains of the branch now terminated about a mile from the principal A30 dual carriageway, which in turn lay only one junction away from the M5 motorway. Ah ha! A plan began to form. Given the heavy congestion in the area during the summer months, how much better would it be to build a park-and-ride station at the end of the branch, given that the two major roads into the area met at this point, and on top of that, the proposed location was a greenfield site just ready for digging up and slapping down a railway station? (Before the tree huggers and badger lovers kick off, this is just fiction). Park up your car, and take the train to the delights of Torbay, Exeter city centre, Exmouth or Barnstaple. Naturally enough, some artistic licence would be required and bit of imaginative thinking, but it was an entirely feasible reason to build a station in the area, as well as a small freight yard that could handle road-to-rail containers – this was the Ed Burkhart era of EWS, and wagonload traffic was being trumpeted as the way forward for freight customers. I firmly believe that the Exeter park-and-ride idea will work in real life equally well, even though our current lords and masters just haven’t got enough vision to see it for themselves. Consequently, it will just have to wait until I get elected, and that will be one of the first things on my agenda. Back to the model though, and Exeter Parkway plus Exeter New Yard were born. 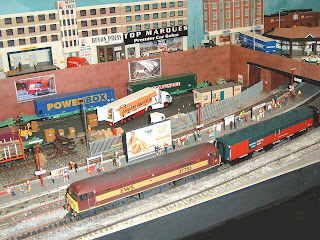 An overview of the station, with the buildings above the simple island platform. A Railnet parcels bay occupies the foreground, and the EWS New Yard is in the background.
All the trains that I operated on the layout were based around real services operating around the period, with details gleaned mostly from the excellent Freightmaster and Class One books (and internet service) by Jeff Rawlinson. Some tweaking was necessary, but by and large, operation was prototypical. In those days I have to say that I was far more interested in operating a layout than building it, a position that has completely turned around in the last five years as my skills evolved. 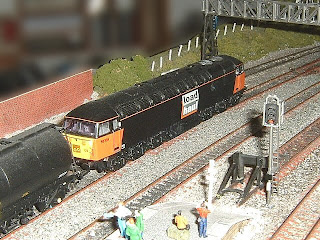 The northern end of the station, heading towards Chudleigh, although I did not envisage operation running along this line - these tracks simply s erved coach sidings and run-round loops for freight and parcels services.
As far as scenics went, I decided that the station should run underneath the main shopping street, which provided access off the main road into the car park. The other end of the layout would be more countrified, and the centre would be taken up with an industrial estate, representing the Marsh Barton area. A distinct lack of planning meant that I had five tracks all curving into the fiddle yard at the ‘country’ end, and as they disappeared into the backscene, this area needed a natural scenic break. You’ll see how I dealt with this thorny issue as we progress … 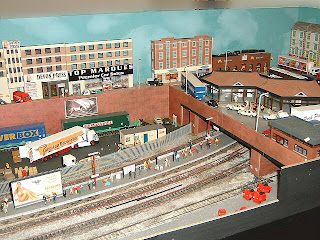 A glimpse of the town above the tracks, designed primarily to hide the tight curves providing access to the fiddle yard - or Exeter St Davids in real life.
Such was the background. I won’t go into the long details about building the layout itself; I’ll use the photos to speak about specific areas as this article proceeds. I must apologies for the pretty poor quality of photos used; many are low-res scans from original prints that got lost in two subsequent house moves, but this just a ramble down memory lane – and believe me, in many cases it is just as well that the image quality isn’t all that it could be! 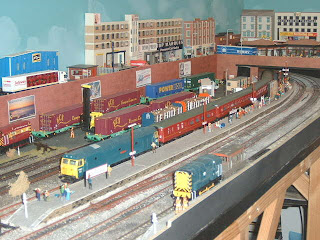 This scene depicts the busy nature of the layout, and I tried to create a feeling of a bustling urban area. I re-used the idea of an urban cutting as a site for a station far more successfully when constructing Valkova Road - however, that layout owes its existence to Exeter Parkway and the lessons learned from building it. 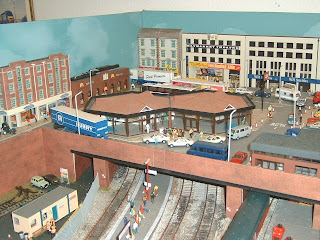 The station buildings were actually two Faller supermarket kits joined together. The hexagonal shapes were interesting to work with, and created a contemporary look for a station that would have built in the 1990's. 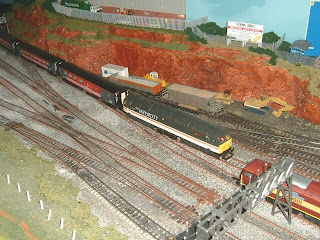 The station throat at the Chudleigh end. The brick cutting walls have by now given way to traditional red Devon cliffs - they look rather gaudy in this view, but in reality were not quite as vibrant! The ballasting was truly awful. I attempted to do the whole lot in a day, and as it is a rather tedious job, I got bored and rushed it. Oh dear. Apart from looking horrendous, particularly in close-up, I had no end of problems with the points after that. Oh well, live and learn. 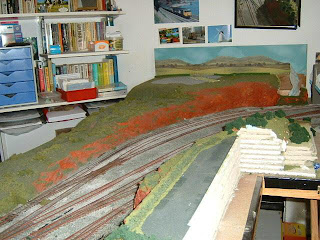 Unfortunately, very few pictures were taken (or survive) from during construction. This shot shows the first area of the layout to receive scenery. The cliffs and countryside at the northern end of the layout were built in a three day period when a modelling friend, Sam, came to stay. We created this set piece, which would later feature a hotel and beer garden, and it remained the best part of the layout throughout its life. This was my first bash at creating scenics, and was a very useful exercise. 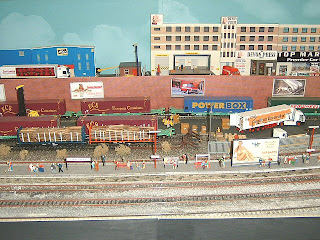 Exeter New Yard was inspired by a real life version from my home town of Grantham. Everyday, an 'Enterprise' freight service would drop off a pair of container wagons into a siding. A lorry would then arrive, and the driver operated a large fork lift truck that would take the empty container from the lorry and load it onto a railway wagon. He would then take a fresh container from the recently arrived train and put it on the lorry and drive off - all in about 20 minutes. It was an ideal scenario for modelling, so I took the idea and expanded it as shown here. This area had originally been earmarked for a loco depot, but there was no convincing reason as to why a depot would be built in a such a location.

So that is an overview of my first layout, and as I dig out more pictures, I'll post them. It has brought back some happy memories going through them again.