Following my day-long saga at Peterborough on Friday (see my post on Grumpy), it may seem strange that I would voluntarily return there on Saturday in my own time. But this was different – the forecast was promising, and I wanted to return to the Nene Valley Railway in order to shoot some more film for one of my epic productions. Last weekend, you may recall, I happened upon a Thomas The Tank Engine weekend, and everything in sight had a big happy face on it – except me, of course. I don’t do happy.
Once again I turned up good and early to get the feel of the place and see what was running. The NVR’s website promised that steam loco 73050 City of Peterborough and diesel 31271 Stratford would be running. This was good news on both counts; I needed some good footage of City of Peterborough to complement the video I shot last week – most of which was taken on board the train to get round the happy face problem. 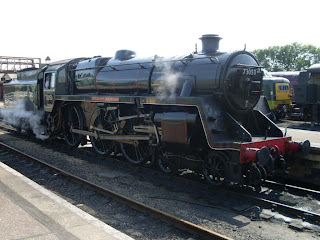 The class 31 was a bonus; I remember these locos from years ago when I lived in the North East and love the sound of their engines working hard. I’ve not seen or heard one since the 1980’s, so I was looking forward to renewing my acquaintance with the class. 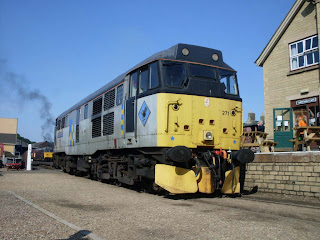 Unlike most preserved lines that simply operate from A to B and back again, the NVR does it differently. All trains leave Wansford, the main station and operating base, and head west through the tunnel to Yarwell, a short distance away. The loco runs round, then the train returns to Wansford before proceeding to Peterborough Nene Valley, the easterly terminus. After another run round, the service heads back to Wansford and the procedure starts again. This is great for passengers and photographers alike.

At first it looked like there would be problems, as 73050 was on the Danish set of coaches – this did not fit in with my plans at all, as I needed the Mark 1 coaching stock set to match my previous footage! I’d planned a variety of locations to get the whole train on film, and this was not much good at all. However, a quick chat with the helpful driver discovered that the Danish coaches would be shunted out of the way for the day, and both locos would share the Mk1 set of stock. Excellent stuff! 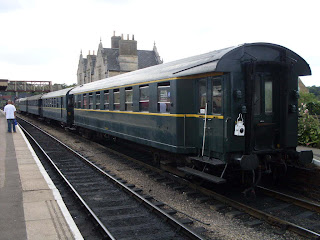 Should you be wondering why a set of Danish coaches would be residing in Cambridgeshire, well, the NVR promotes preservation of foreign stock in a big way, and has an impressive collection of European stock in its collection, including some beautiful original Wagon Lits vehicles as seen on ‘Murder on The Orient Express.’ There are some fantastic Polish locos here as well, although mostly in a state of disrepair and years away from running in service. Perhaps the NVR could have a word with all the plumbers living in Peterborough, and get them to fix up these locos before they return to Warsaw and Gdansk due to the recession (the plumbers, not the locos). The NVR has been used for filming by a lot of companies; the best footage of the foreign stock can be seen in the James Bond film 'Octopussy' which features extensive use of the line and a special steam hauled train. This trailer from the film shows some of the railway scenes:

I feel that I should point out that this film is not a Grumpy Git Production.

I had my day planned in advance as the steam loco would only be running two return trips during the day, and I needed to be in my chosen locations ready for action, with finger poised above the hot shutter button. Because 73050 runs tender first to Peterborough, I would have precisely two opportunities to capture it running loco first on the westbound runs. I knew exactly where I needed to be and when for these runs, and the rest of the day was duly planned around these criteria. I factored in some class 31 filming as well, plus some general shunting moves around Wansford that could come in useful. 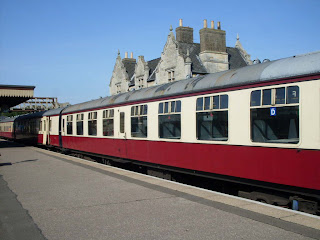 Well, I have to say that somebody up there was smiling on me today – maybe it was Saint Thomas? The weather conditions were perfect, all trains ran on time and I had no problems reaching my chosen locations via car, bike and on foot as the location demanded. The NVR staff were as friendly as ever, they gave long blasts on the whistle and waved as they passed by each time. I spent six hours on and around the line, and it was a very pleasant day indeed. 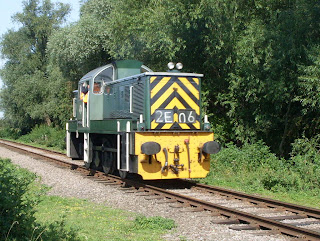 This was an added bonus, class 14 D9516 trundled past as I waited for the class 31 to arrive at the former station of Castor. It had been down to Ferry Meadows with the Royal Mail TPO set that was blocking a platform at Wansford Station.
The Nene Valley are holding a 1968 weekend of mixed steam and diesel operation, with extra services and freight trains running on 12/13th September, so expect to see me there. You never know, I might even have a happy face on …..