... he's come to his senses.
Generally speaking, I am not a fan of London exhibitions. For some reason, shows in and around the capital attend a higher than normal quota of know-all numpties who are incredibly annoying. On top of this, throw in all the other disadvantages of London – ridiculous roads, impossible parking, astronomically priced overnight accommodation, congestion, bus lanes, bus lane cameras, suicidal cyclists in unbecoming skin-tight lycra plus some of the rudest people in the country and you can see why I prefer to stay away. 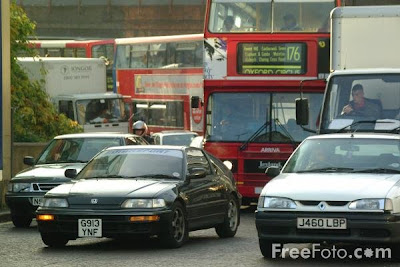 The joys of London before you even get to the exhibition venue - where you will
no doubt be greeted by, 'You can't park there!' . Picture from FreeFoto. 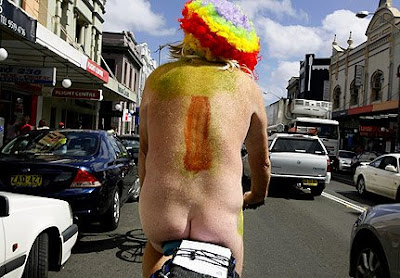 There's only one thing worse than a cyclist in body hugging lycra ...
But there is one exhibition that breaks the London mould quite successfully, and remains the only show that I have traded, exhibited and demonstrated at. It is the Enfield Whitewebbs model railway show, held in the transport museum close to Enfield. Being only a couple miles off the M25, access is reasonably easy if you time it right and there is a McDonalds close by. Parking for exhibitors is free, but a logistical nightmare, until you understand the system and play it to work for you, rather than against you – although it took a few years to figure this out. 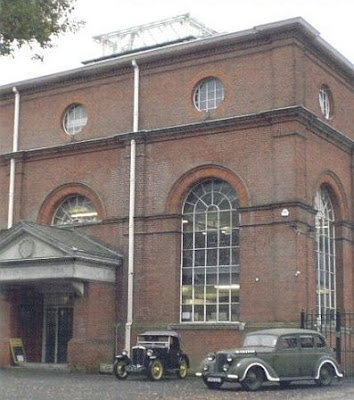 The only way to get parked during the exhibition is to get to
the show well in advance. These wily traders arrived in 1947.
Bernie, the (former) Exhibition Manager, hails from Darlington, so he approached organising the show in a no-nonsense manner that is refreshing and effective. His missus, Jan, takes care of the catering side of things, and they both believe in looking after the traders and exhibitors equally, which is as welcome as it is unusual. Traders are often seen as second-class citizens, who are invited to a show purely to bring revenue in for the hosting club. The fact that their presence also brings in visitors is a point entirely missed by the committees. Before the Show opens to the public, Jan has the coffee, tea and bacon butties going for everyone, which is a great boost before a long day of trading, especially after the slog of the A1 and M25. Lunch is also provided – and you have a choice of sitting down in the restaurant, which is a converted railway carriage – or if you are alone and can’t leave your stand, then lunch is brought to your stand. 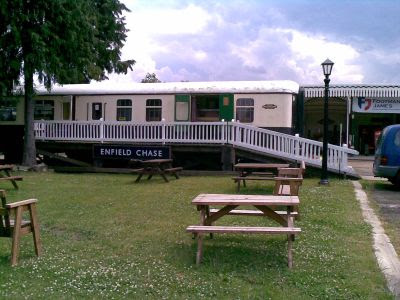 A tranquil spot for lunch; nice to see that some effort has gone into this area.
It is a simple but extremely welcome gesture, so why can’t more clubs take this approach? Bernie pops round during the day to see how you’re doing; it makes a difference when organisers show an interest – far too many only emerge when it’s time to get your stand money. At Bernie’s show, you are greeted like an old friend, rather than a wallet on legs.

When I first began trading, it was Bernie who gave me my big break, so to speak. I had previously run a business selling railway clocks, but I wound this up (did you see what I did there?), as it didn’t pay. I was launching a new range of modern image 4mm signs and accessories as an experiment, but didn’t intend to undertake exhibitions (apart from the modern image orientated DEMU Showcase) due to the costs and viability of a new range like this. I mentioned this, and Bernie offered me a free stand, on the assumption that if I made nothing then I paid nothing, but if I were successful then a donation to the club would be welcome. This was a great opportunity to try the fledgling products out, so I knocked up a couple of dioramas, produced some stock and off I went – and had a blinding day. The product range was well received, and I was able to build up on this and build up the business accordingly. Consequently I returned every year until I shut down the business; then the following year I returned as an exhibitor with Valkova Road. My final appearance was in 2008 with a scenic demonstration stand, a new project I am developing in conjunction with Ten Commandments to demonstrate scenic and lineside detailing.

So the only thing I haven’t done at Whitewebbs is to visit the show as a punter! So perhaps in 2009, you might see Grumpy once more down in London - don’t expect to see me hanging round the layouts, though - I’ll be the first one in the queue for a bacon butty. The Enfield Whitewebbs exhibition is held on 26 September 2009. 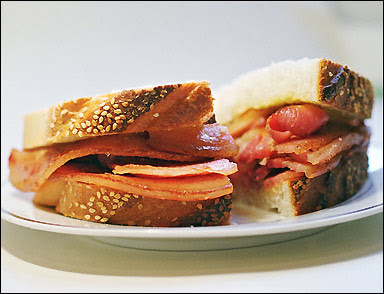