During my time on the show circuit, I became increasingly appalled at the unbelievable dress standards that appear time and time again. Rail enthusiasts bemoan the fact that they are ridiculed as ‘the bobble hat brigade’, but to be honest, some of them do the hobby no favours at all. Summer is by far the worst time of year; at least in winter people tend to cover up some of the most shocking fashion offences. I believe that Trinny & Susannah should be present on the door of each show, and bar entry to anyone who fails a simple dress code.
I’m not talking about dressing in a suit; my grievances are directed at those men (it’s always men at shows who are the offenders) who are graduates of the Vicky Pollard school of wardrobe and fashion.

Firstly, mandals – or men’s sandals (a complete contradiction in terms). I have no objection to seeing a pretty 20-something girl sporting an elegant pair of strappy Jimmy Choos (or even Primark) – but I do not want to see a 60-something bloke with huge gnarled twisted trees roots sporting great lumps of earth between the toes which are probably cultivating next year’s crop of Maris Pipers; uncut yellowed nails that have got so long they are bent over backwards and could easily stand in for a JCB on a building site – and judging by appearances, they probably have been - shoved into a pair of Jesus sandals. Especially when I’m having a sandwich. 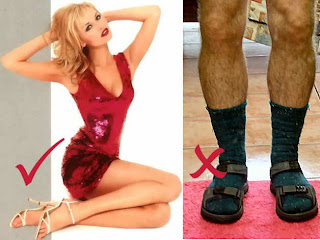 Those that have the decency to cover up these grotesque features maintain the sandals, but encase them either in knee-high grey / black / white / unwashed white that have turned grey or black socks or knee-high football socks. There’s just no helping some people. Except with an AK47, but that’s not noticeably legal. Yet.

Many traders and layout operators tend to have standardised polo shirts these days, featuring the name of the business or the club on them. An excellent idea, it looks professional, at least if they see a washing machine and an iron from time to time, and prevents the wearer from choosing something out of their own wardrobe. I applaud this idea wholeheartedly. Unfortunately, there are no such conventions for visitors to shows, who wear anything they like - apart from the unfortunate omission of deodorant in a distressing number of cases. Given that most exhibition halls are superheated to equate to the interior of a volcano, this is not pleasant. Despite the heat, and regardless of whether it’s mid summer outside and the humidity has gone into stratospheric levels, many visitors pile into the shows with innumerable layers of clothing, topped off by the ubiquitous padded anorak, just in case a blizzard should hit Surbiton in mid July. Then they wonder why The Sun takes the piss. The clothing layers are enhanced with a backpack so large that Sir Ranulph Fiennes turned one down for his recent climb up Everest, given that he was only popping out for a couple of weeks. These backpacks don’t seem to contain anything other than the latest copy of Model Rail magazine, but are used to smack into innocent bystanders at crowded layouts, block the view and generally remove the odd eyeball or two. I abhorred them on my small tradestand, because whenever the person wearing one would attempt a 3-point turn on my stand in order to leave, the backpack would invariably take half the bloody stand with it.

Then we come to the hats. The traditional bobblehat now seems to be in terminal decline, thank God for that, and has been replaced by the good old baseball cap, and here I do send a rare bit of praise out – at least at shows people manage to wear them the correct way round. Cowboy hats or Australian Bush hats are creeping in to several shows now, but I assume that its just people acclimatising themselves ready for global warming. Not that parched desert conditions will see off the anoraks, of course!